Alberto Vargas (9 February 1896 – 30 December 1982) was a noted Peruvian painter of pin-up girls and erotica.
Born in Arequipa, Peru, Joaquin Alberto Vargas y Chávez came to the United States in 1916 after studying art in Europe prior to World War I. He was the son of famous Peruvian photographer Carlos Vargas.[1] His early career included work as an artist for the Ziegfeld Follies and for many Hollywood studios. Vargas\' most famous piece of film work was that for the 1933 film The Sin of Nora Moran, which shows a near-naked Zita Johann in a pose of desperation. The poster is frequently named one of the greatest movie posters ever made.[1] He became famous in the 1940s as the creator of iconic World War II era pin-ups for Esquire magazine known as \"Varga Girls.\" The nose art of many World War II aircraft was adapted from these Esquire pin-ups.

A legal dispute with Esquire over the use of the name \"Varga\" resulted in a judgment against Vargas and he struggled financially until the 1960s when Playboy magazine began to use his work as \"Vargas Girls.\" His career flourished and he had major exhibitions of his work all over the world. The death of his wife Anna Mae in 1974 left him devastated and he stopped painting. The publication of his autobiography in 1978 renewed interest in his work and brought him partially out of his self-imposed retirement to do a few works, such as album covers for Bernadette Peters and The Cars. He died of a stroke on December 30, 1982, at the age of 86.

Many of Vargas\' works from his period with Esquire are now held by the Spencer Museum of Art at the University of Kansas, which was given those works in 1980 along with a large body of other art from the magazine.[2]

His work was typically a combination of watercolor and airbrush. His mastery of the airbrush is acknowledged by the fact that the highest achievement in the community of airbrush artistry is the Vargas Award, awarded annually by Airbrush Action Magazine. His images would often portray elegantly dressed, semi-nude to nude women of idealized proportions. Vargas\' artistic trait would be slender fingers and toes, with nails often painted red.

Vargas is widely regarded as one of the finest artists in his genre. He also served as a judge for the Miss Universe beauty contest in 1956-58.[4] 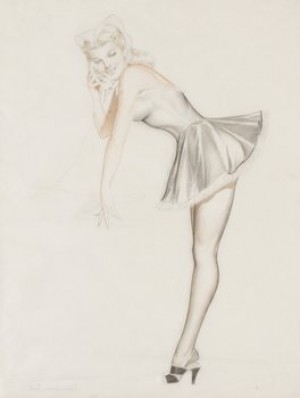