Anton Hlavacek was trained as a technical draftsman before he studied at the art academy in Vienna from 1854 until 1864. With his teacher Albert Zimmermann he travelled in Bavaria and Italy. After his studies he lived at Worms and Cologne for two years. After his return to Vienna he was became known for his monumental paitings for the Rathaus and the Naturhistorische Museum. In 1873 he received a medal at the World Exhibition in Vienna. He is best known for his paintings of Vienna at the turn of the century. 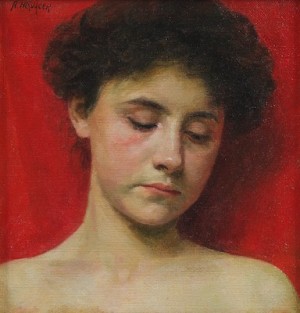 Portrait Of A Woman