Arthur Douglas Peppercorn ‘The English Corot’ – Peppercorn would no doubt have felt flattered by this sobriquet, for more than any other artist it was Corot whom Peppercorn admired and emulated. But Peppercorn was no mere imitator; rather than record, like Corot, the tranquil romantic poetry of nature – those balmy Barbizon summer days – Peppercorn sought to depict the darker moments of nature, its moody power and drama.

Peppercorn was a tough man who survived much sadness in his life. His parents died young, leaving him in the care of guardians and he himself suffered a serious illness when only twenty. He was, however, very happily married and had nine children with his wife ‘Min’.

In 1917 when Peppercorn was 70, a disaster struck which would have devastated most other artists of whatever age. A fire broke out in the old man’s studio which burnt to the ground, taking with it more than 100 paintings. It was as if his legacy to the world were to be nothing more than some charred tatters of canvas. Peppercorn was not to be defeated – he set to work feverishly in a brave attempt to recreate his life’s work. His last pictures have the same menacing colours, the same sombre fields of dark rich tones as his early work, but the brushwork is even bolder as Peppercorn raced to cover canvas. 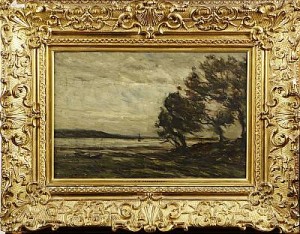