Bartholomeus (Bartholomaeus) Spranger (21 March 1546—August 1611) was a Flemish Northern Mannerist painter, draughtsman, and etcher. He was born in Antwerp.

In 1565, after completing his training with Jan Madyn, he traveled to Paris and Italy. He worked on wall paintings in various churches. At Rome, he became, like El Greco, a protege of Giulio Clovio. Pope Pius V appointed him court painter in 1570. He was summoned to Vienna by Maximilian II, Holy Roman Emperor, who died soon after his arrival in 1576. But his successor Rudolf II was even more keen to employ him, and in 1581 he was appointed court painter, the court being by then having moved its seat to Prague, where he stayed until his death there in 1611, shortly before Rudolf was deposed. Rudolf arranged a wealthy marriage for him, and his house was a centre for artists in Prague.

Aegidius Sadeler, who lived in his house in Prague for some time, and Hendrik Goltzius made engravings of his paintings, spreading Spranger\'s fame around Europe. Spranger\'s paintings for Rudolf mostly depict mythological nudes in various complex poses, with some connection to the Emperor\'s esoteric Late-Renaissance philosophical ideas. His paintings are the most characteristic of the final phase of Northern Mannerism; by far the best collection is in Vienna. His drawings have great energy, in a very free technique. 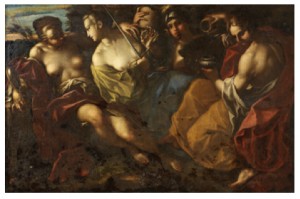