Bernard Pothast was born on 30th November, 1882 in Hal, Belgium. He studied painting at the Rijksakademie in Amsterdam between 1904 and 1907 and there he was particularly influenced by the artist A. Allebe, who was a professor at the school. Pothast was very much a follower of the Hague School who were the Dutch equivalent of the French Impressionists. He specialised in painting interior scenes with children, often depicting toys and other objects which are of both an historical and artistic interest.
It has been suggested that his models were his wife and children and it is tempting to accept this as true when a likeness of models can be detected throughout his works. The artist's use of light was very special. His figures are often bathed in a warm glowing light which usually emanates from a window and gives and added intimacy to the scene. Pothast died in Laren on 1st February 1966. His paintings continue to be very popular and can be found in private collections throughout the world.

Born in Belgium, Bernard Pothast traveled to Paris to attend the École des Beaux Arts. There he studied under the artist Gabriel Ferrier. He also studied at the School of Reichsakad and later in Amsterdam under the artist Jules Alby. Bernard Pothast enjoyed a successful career as a genre painter. His favorite subject was the peasant family. European painters of peasants in the nineteenth century found themselves heirs to the inheritance of idyllic literature, which set up certain stereotypes of rustic life. Pothast’s images depicted peasant mothers instructing or caring for their young children, placed in rustic interiors sparingly decorated with the family's humble possessions. Their interiors were typically illuminated by the light of early or midday sunshine. These renderings charmed the newly rich industrial merchant, now living and working in urban surroundings, yet craving for the simplicity of country life. Pothast’s sentimental illustrations of peasant life were very popular during his lifetime, and remain so today. 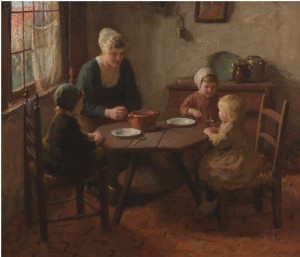 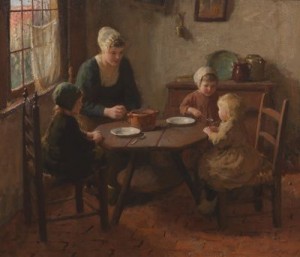 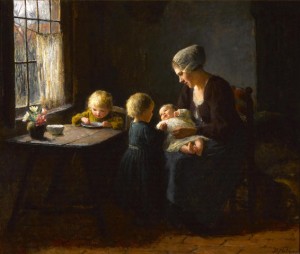 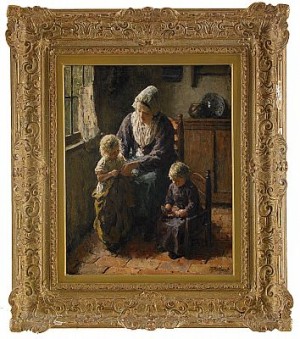 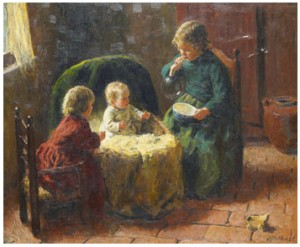 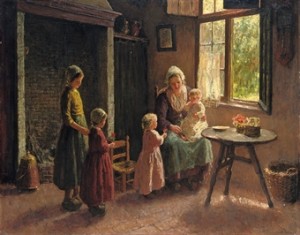 Flowers For The New Arrival