The son of a soldier of the Izmailovsky Regiment, Matveev studied at the Imperial Academy between 1764 and 1778. In his final year he received a large gold medal, and a few months later he left Russia for Rome, on a scholarship from the Academy, never to return. The reasons for this are not clear; it may have been for artistic or financial reasons, or a combination of the two. The forty-seven years he spent in Italy established him as Russia's foremost classical landscape painter; his paintings were acquired by Russian collectors, and towards the end of his life Sylvester Schedrin, who in many ways worked in Matveev's footsteps while establishing his Italian canon, visited him in his studio in Rome.
The role and importance of landscape painting was changing in Russia, as it was all over Europe. It had been considered much inferior to history painting; little more than an applied art form, useful for decorating the interiors of houses, or for use in the background of paintings on historical or biblical themes. Matveev's influence on the following generation of Romantic painters such as Sylvester Schedrin, and through him on Russian landscape painting as a whole is clear, but because Matveev never returned to his homeland, his paintings are extremely rare, especially in private collections. There are nineteen in the collection of the Russian Museum in St.Petersburg, and a further six in the Tretyakov Gallery in Moscow. See N.K. Markova, Peizazh v Russkoi Zhivopisi ot klassitsima do symvolizma, Moscow 1999. 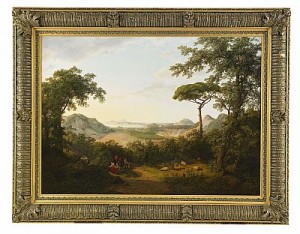