Frank Stella was born in Maiden, Massachusetts, studied at Phillips Academy, Andover, and then at Princeton University.

Upon moving to New York City, he reacted against the expressive use of paint by most painters of the abstract expressionist movement, instead finding himself drawn towards the "flatter" surfaces of Barnett Newman's work and the "target" paintings of Jasper Johns. He began to produce works which emphasized the picture-as-object, rather than the picture as a representation of something, be it something in the physical world, or something in the artist's emotional world. Stella married Barbara Rose, later a well-known art critic, in 1961. Around this time he said that a picture was "a flat surface with paint on it - nothing more". This was a departure from the technique of creating a painting by first making a sketch. Many of the works are created by simply using the path of the brush stroke, very often using common house paint.

This new aesthetic found expression in a series of paintings, the Black Paintings (60) in which regular bands of black paint were separated by very thin pinstripes of unpainted canvas. Die Fahne Hoch! (1959) is one such painting. It takes its name ("The Raised Banner" in English) from the first line of the Horst-Wessel-Lied, the anthem of the National Socialist German Workers Party, and Stella pointed out that it is in the same proportions as banners used by that organization. It has been suggested that the title has a double meaning, referring also to Jasper Johns' paintings of flags. In any case, its emotional coolness belies the contentiousness its title might suggest, reflecting this new direction in Stella's work. Stella’s art was recognized for its innovations before he was twenty-five. In 1959, several of his paintings were included in "Three Young Americans" at the Allen Memorial Art Museum at Oberlin College, as well as in "Sixteen Americans" at the Museum of Modern Art in New York (60). Stella joined dealer Leo Castelli’s stable of artists in 1959. From 1960 he began to produce paintings in aluminum and copper paint which, in their presentation of regular lines of color separated by pinstripes, are similar to his black paintings. However they use a wider range of colors, and are his first works using shaped canvases (canvases in a shape other than the traditional rectangle or square), often being in L, N, U or T-shapes. These later developed into more elaborate designs, in the Irregular Polygon series (67), for example.

Also in the 1960s, Stella began to use a wider range of colors, typically arranged in straight or curved lines. Later he began his Protractor Series (71) of paintings, in which arcs, sometimes overlapping, within square borders are arranged side-by-side to produce full and half circles painted in rings of concentric color. These paintings are named after circular cities he had visited while in the Middle East earlier in the 1960s. The Irregular Polygon canvases and Protractor series further extended the concept of the shaped canvas.

Stella began his extended engagement with printmaking in the mid-1960s, working first with master printer Kenneth Tyler at Gemini G.E.L. Stella produced a series of prints during the late 1960s starting with a print called Quathlamba I in 1968. Stella's abstract prints in lithography, screenprinting, etching and offset lithography (a technique he introduced) had a strong impact upon printmaking as an art.

In 1967, Stella designed the set and costumes for Scramble, a dance piece by Merce Cunningham.
One year after his graduation in 1968, he was included in an exhibit, Sixteen Americans, at the Museum of Modern Art in New York. The following year, his shaped canvases were the basis of his first one-man show at the Leo Castelli Gallery. Stella's work is concerned with regulation of structure and color. His first prints were often modestly scaled and monochromatic.

The Museum of Modern Art in New York presented a retrospective of Stella’s work in 1970, making him the youngest artist to receive one. During the following decade, Stella introduced relief into his art, which he came to call “maximalist” painting for its sculptural qualities. Ironically, the paintings that had brought him fame before 1960 had eliminated all such depth. The shaped canvases took on even less regular forms in the Eccentric Polygon series, and elements of collage were introduced, pieces of canvas being pasted onto plywood, for example. His work also became more three-dimensional to the point where he started producing large, free-standing metal pieces, which, although they are painted upon, might well be considered sculpture. After introducing wood and other materials in the Polish Village series (73), created in high relief, he began to use aluminum as the primary support for his paintings. As the 1970s and 1980s progressed, these became more elaborate and exuberant. Indeed, his earlier Minimalism [more] became baroque, marked by curving forms, Day-Glo colors, and scrawled brushstrokes. Similarly, his prints of these decades combined various printmaking and drawing techniques. In 1973, he had a print studio installed in his New York house. In 1976, Stella was commissioned by BMW to paint a BMW 3.0 CSL for the second installment in the BMW Art Car Project. He has said of this project, "The starting point for the art cars was racing livery. In the old days there used to be a tradition of identifying a car with its country by color. Now they get a number and they get advertising. It’s a paint job, one way or another. The idea for mine was that it’s from a drawing on graph paper. The graph paper is what it is, a graph, but when it’s morphed over the car’s forms it becomes interesting, and adapting the drawing to the racing car’s forms is interesting. Theoretically it’s like painting on a shaped canvas."

He followed the compositions of his paintings, but was traditional in his approach to the graphic media. Then, in the early 1970s, he moved away from flat geometric shapes toward illusionism, with liberal uses of color. Later, he experimented with combinations of shapes, colors, and techniques in print series, which are an incredible number of variations on a theme. Today, his prints no longer follow his paintings-they are uniquely inventive and visually exciting in themselves. Stella is one of the most important contem p orary printmakers. Highly acclaimed, both critically and popularly, his work has been exhibited in the most prominent American and British galleries and is included in prestigious public collections thoughout the world.

From the mid-1980s to the mid-1990s, Stella created a large body of work that responded in a general way to Herman Melville’s Moby-Dick. During this time, the increasingly deep relief of Stella’s paintings gave way to full three-dimensionality, with sculptural forms derived from cones, pillars, French curves, waves, and decorative architectural elements. To create these works, the artist used collages or maquettes that were then enlarged and re-created with the aid of assistants, industrial metal cutters, and digital technologies.

In the 1990s, Stella began making free-standing sculpture for public spaces and developing architectural projects. In 1993, for example, he created the entire decorative scheme for Toronto’s Princess of Wales Theatre, which includes a 10,000-square-foot mural. His 1993 proposal for a kunsthalle and garden in Dresden did not come to fruition. In 1997, he painted and oversaw the installation of the 5,000-square-foot "Stella Project" which serves as the centerpiece of the theater and lobby of the Moores Opera House located at the Rebecca and John J. Moores School of Music on the campus of the University of Houston, in Houston, TX. His aluminum bandshell, inspired by a folding hat from Brazil, was built in downtown Miami in 2001; a monumental Stella sculpture was installed outside the National Gallery of Art in Washington, D.C.

Stella’s work was included in several important exhibitions that defined 1960s art, among them the Solomon R. Guggenheim Museum’s The Shaped Canvas (1965) and Systemic Painting (1966). His art has been the subject of several retrospectives in the United States, Europe, and Japan. Among the many honors he has received was an invitation from Harvard University to give the Charles Eliot Norton Lectures in 1984. Calling for a rejuvenation of abstraction by achieving the depth of baroque painting, these six talks were published by Harvard University Press in 1986 under the title Working Space.

Stella continues to live and work in New York. He also remains active in protecting the rights for his fellow artists. On June 6, 2008, Stella (with Artists Rights Society president Theodore Feder; Stella is a member artist of the Artists Rights Society) published an Op-Ed for The Art Newspaper decrying a proposed U.S. Orphan Works law which "remove[s] the penalty for copyright infringement if the creator of a work, after a diligent search, cannot be located."

In 2009, Frank Stella was awarded the National Medal of Arts by President Barack Obama.

Along with artists Shepard Fairey and Andres Serrano, Stella appeared on the satirical television program The Colbert Report on December 8, 2010. As part of a segment with comedian Steve Martin, Stella appraised a portrait of Colbert. 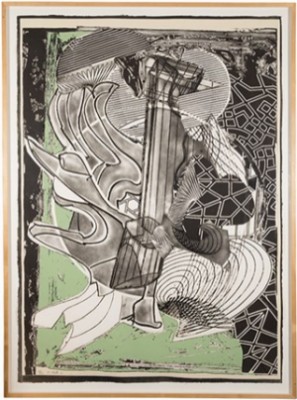 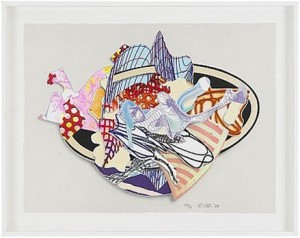 "the Symphony” From The Embassy Series (-90) 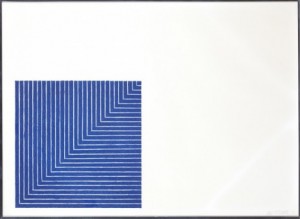 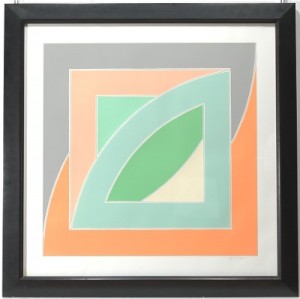 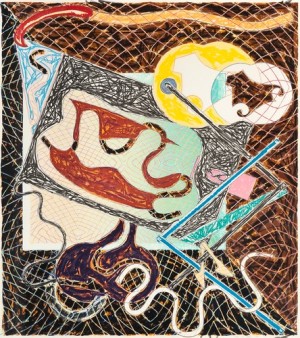 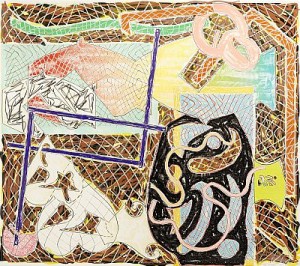 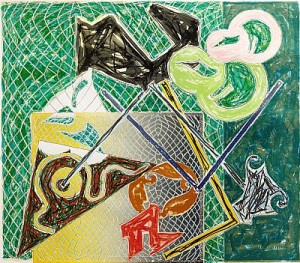 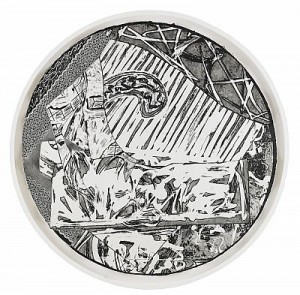 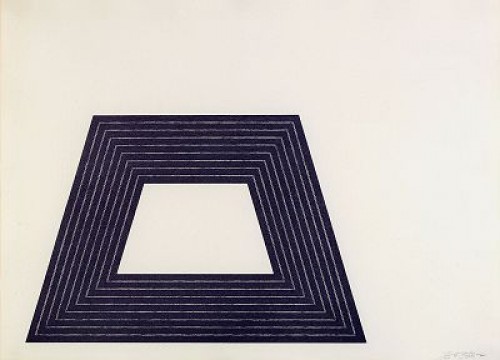 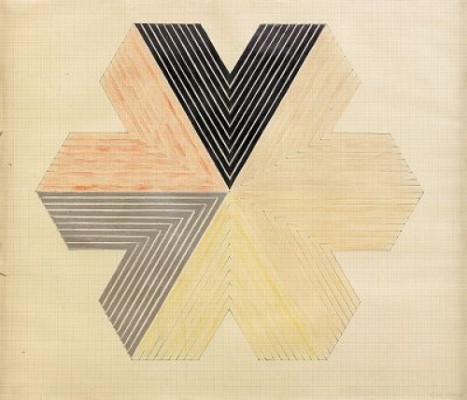