Giovanni Battista Piazzetta (also called Giambattista Piazzetta or Giambattista Valentino Piazzetta) was an Italian rococo painter of religious subjects and genre scenes.
Piazzetta was born in Venice, the son of a sculptor, from whom he had early training in wood carving. Starting in 1697 he studied with the painter Antonio Molinari. By Piazzetta\'s account, he studied under Giuseppe Maria Crespi while living in Bologna in 1703-05, although there is no record by Crespi of formal tutelage. Piazzetta did find inspiration in Crespi\'s art, in which the chiaroscuro of Caravaggio was transformed into an idiom of graceful charm. He was also greatly impressed by the altarpieces created by another Bolognese painter of a half-century earlier, Guercino.
Around 1710, he returned to Venice. There he won recognition as a leading artist despite his limited output and his unassuming nature, but he ultimately was less patronized, both in Venice and especially abroad, than two other eminent stars in Venetian late-Baroque/Rococo, Ricci and Tiepolo. These two painters had a luminous palette and facile ease that allowed them to carpet meters of ceiling with frescoes, although with a superficiality and glamor that is absent from Piazzetta\'s darker and more intimate depictions. Nonetheless,Tiepolo, who collaborated with Piazzetta on some projects, was greatly influenced by the older artist; in turn, the luminosity and brilliance of Tiepolo\'s palette would influence Piazzetta in his later years.
Piazzetta created an art of warm, rich color and a mysterious poetry. He often depicted peasantry, even if often in a grand fashion. He was highly original in the intensity of color he sometimes used in his shadows, and in the otherworldly quality he gave to the light which throws part of a composition into relief. The gestures and glances of his protagonists hint at unseen dramas, as in one of his best-known paintings, The Soothsayer(1740, now in Gallerie dell\'Accademia, Venice). He brought similar elusiveness to works of a religious nature, such as the Sotto in su Glory of St. Dominic in the Church of Santi Giovanni e Paolo.
Also notable are his many carefully rendered drawings of half-length figures or groups of heads. Usually in charcoal or black chalk with white heightening on gray paper, these are filled with the same spirit that animates his paintings, and were purchased by collectors as independent works. He also produced engravings.
In 1750 Piazzetta became the first director of the newly founded Scuola di Nudo, and he devoted himself in the last few years of his life to teaching. He was elected a member of the Bolognese Accademia Clementina in 1727. Among the painters in his studio were Domenico Maggiotto, Francesco Dagiu (il Capella), John Henry Tischbien the Elder, Egidio Dall\'Oglio, and Antonio Marinetti.[1] Among younger painters who emulated his style are Giulia Lama, Federico Bencovich, and Francesco Polazzo (1683-1753). He died in Venice in 1754. 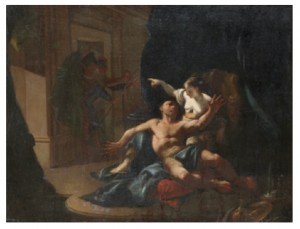