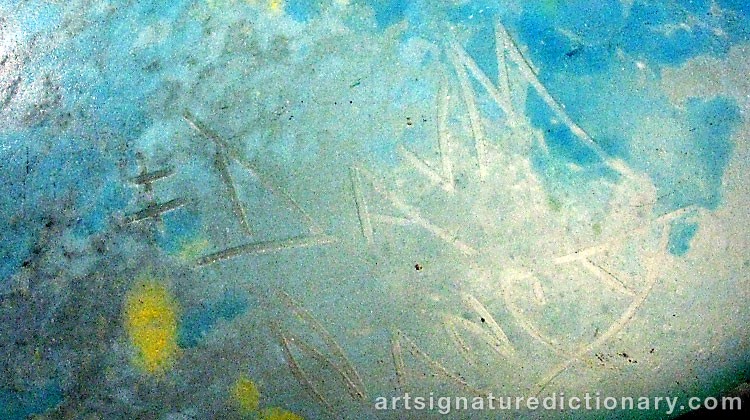 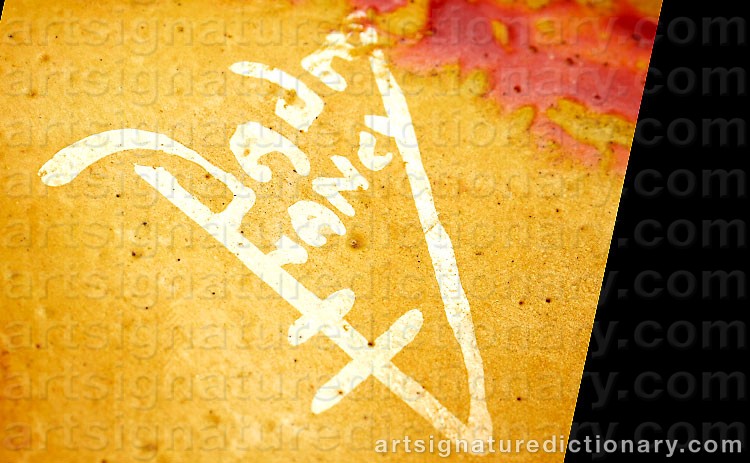 The world-famous manufacturer, which still exists today under the name "Cristallerie Daum", was founded in 1875 as "Verrerie de Nancy". The manufacture was taken over in 1887 by the two sons Auguste (1853-1909) and Antonin Daum (1864-1930), the latter taking over the artistic direction. The Daum workshop formed some of the great names in Art Nouveau: Jacques Gruber (from 1893 to 1897), Henri Bergé (from 1900), Almaric Walter and Charles Schneider made their debut there. These men could not use their own name. All the vases were signed Daum. This is the reason why the factory continued to produce high quality glass.

History
After the Franco-Prussian War (19 July 1870 to 29 January 1871), Jean Daum (1825 - 1885), who was a notary in Bitche, moved to Nancy in 1876. Because it would be 1878 that the borderline between France and Germany moved to close to Nancy and Bitche became German territory. Wealthier people in the ceding territory out of France escaped to Nancy where suddenly became a prosperous town.
He borrowed money to the proprietors of the Sainte-Catherine glassworks in Nancy. However the glassware company could not earn sufficient profit and these debtors could not repay their debt. Jean Daum was compelled to buy the factory at F 50,000 on 23 March 1878. He became the owner of the glassware factory employing 150 workers in the business field which he knew nothing.
Jean Daum risked all his money and the only way to survive was to get every member of the family involved. In 1878, his son Jean Louis Auguste Daum (1853-1909), who was trained as a lawyer, joined the company. He married daughters of rich businessmen. The dowries these ladies brought into their marriage went straight into the glassfactory. The three daughters of Jean Daum were asked not to marry. He did not want to spent money on their dowry. These women, Louise, Jeanne and Fanny, were non-payed employees the rest of their lives. Unfortunately Jean Daum did not know the initial success of the company. After Jean Daum's death in 1885, Auguste Daum continued the business as his father did.
In 1887 his younger brother Antonin Jean Daum (1864-1930), just graduated from the Central School of Arts and Manufactures, joined the company. Facing the poor financial condition of the factory, he was forced to take the lead.
The factory originally specialised in the watch glasses, the window glass, and the glassware for taverns (drinking glasses and pitchers). Antonin Daum began to embellish tableware by using his familier techniques of making glass and he planned to change the commodity production to the artistic creation. They started to produce glass tableware and exhibited some of their models at the Paris Exhibition of 1889. The objects exhibited by Art Nouveau master Emile Gallé, also working in Nancy at the time, greatly inspired the Daum brothers.

In the same year 1889, the brothers founded the company Daum Frères. They intended to assemble a creative and esteemed team of designers, artists and artisans to produce colored glass in a naturalistic style similar to Gallé's. Antonin Daum began to embellish tableware by using his familier techniques of making glass and he planned to change the commodity production to the artistic creation.
Between 1889 to 1891 two brothers prepared the creation of the art department that would be entrusted to Antonin. While Auguste managed the administrative and financial needs, Antonin, a trained engineer, oversaw production and a team of skilled artists. Auguste Daum was a close friend of the scientist Georges Le Monnier who helped them.
In 1891 followed the founding of the "Ateliers d'Art à la Verrerie de Nancy" which had apprentice workshops for glass technicians, polishers, etchers, painters and gilders.
Antonin began to make some simple models with acid etching and then moved to more complicate models using the techniques of wheel engraving on multi-layered glass. Starting with enamelled and engraved "art nouveau" style vases, they moved on to become one of the major forces in the Art Nouveau movement, seriously rivalling Emile Galle. The team created pieces with Japanese inspiration, using asymmetric, organic forms with subtle colors. The factory also incorporated newly developed techniques into their production of chandeliers, lamps, vases, and other art objects in innovative and creative ways.
From 1890 to 1914, Daum Frères created no less than 3000 products.
Source: http://naturalisticspoon.com/Daum_Freres.html

The accidental founder of the company was Jean Daum (1825-1885). He was a financier of the company when it was known as the Verrerie Sainte Catherine. This company quickly hit hard times and it was Jean Daum who took control of it before it failed. Daum was not an artist by trade. He was a notary and industrialist. This new venture was a trial by fire.
The first glass produced by Daum is collectible, but it was not art glass. They made mostly clear glass with gold rims to be used while dining. It wasn’t until the 1890s that Daum began producing what we think of today as “Daum Nancy” glass.
Daum glass is thought to be made by the Daum Freres (brothers). This was not accurate when the company first began operating. It was Jean Daum and his son Auguste Daum (1853-1909) who laid the ground work for Auguste and his brother Antonin Daum (1864-1930) to lead the company in the early 20th century.
All Daum glass is handmade, but that certainly shouldn’t lead the reader to believe that Daum was a mom and pop operation. At the company’s height of production 400 workers were at the factory in Nancy, France. In fact Daum hired and employed some great artists who would later be famous for their own works, namely the Schneider Brothers. Henri Berge, Bernard Gruber, Eugene Gall, and Amalric Walter were key designers at Daum.
It took winning the Exposition Universelle in Paris in 1900 for Daum to really move out of the shadow of fellow Nancy glass maker, Emile Galle. In 1904 Galle died, and that is when Daum really took over the glass industry. Daum’s dominance only lasted for about a decade. In 1914 World War I began in France and the Daum factory was shut down and turned into a hospital. In 1918 the plant reopened, but things were not the same. Antonin Daum was leading the company, but the craftsmanship and innovation of the past twenty years was not present.
The golden age for Daum Nancy was likely between 1895 and 1914. This period saw Daum register patents and experiment successfully with construction and decoration techniques that makes their art so unique and highly desirable today.
The Daum glass factory is still open today. They currently make crystal art. We are mostly interested in purchasing authentic Daum Nancy glass from the Art Nouveau period. Please contact us and tell us what you have.
Source: http://www.daumnancyantiques.com/History_of_Daum_Glass.html 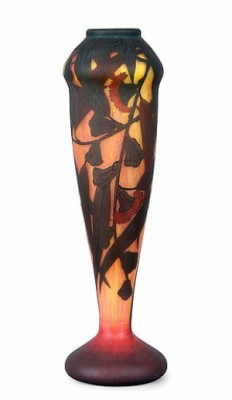 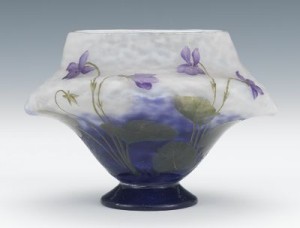 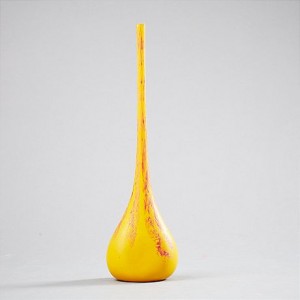 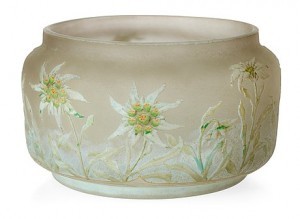