Sir Godfrey Kneller was a leading portrait painter in England, he served all the rulers from Charles II to George I while also portraying Louis XIV and Peter the Great. Born in Lübeck as Gottfried Kniller, he trained in Amsterdam, probably under Ferdinand Bol, and in Rome. After arriving in London in 1676, he established himself as a baroque classicist portrait painter to court society, successfully competing with and then succeeding Peter Lely. Kneller’s series of ladies’ portraits, the so-called ‘Hampton Beauties’, was a response to Lely’s ‘Windsor Beauties’. Kneller’s other series include 14 portraits of admirals, commissioned from him and Dahl by Queen Anne and Prince George of Denmark (circa 1702–08, National Maritime Museum, London) and more than 40 portraits of members of the Kit-Cat Club (circa 1700–20, National Portrait Gallery, London). The Kit-Cat series set a lasting and much imitated format of a small half-length with a plain background. His talent was greatly admired and officially recognized. Appointed Principal Painter to William III and Mary II in 1689, he initially held this position jointly with John Riley. His knighthood three years later was followed in 1715 by a baronetcy, the first to be conferred on a painter. Kneller was assisted by many young artists and the output of his studio was vast and of uneven quality. Although concerned mostly with his own career, he patronized young artists and looked after their training. In 1711 he founded the Academy of Painting in London and became its first governor. 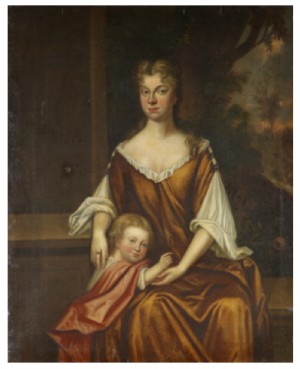 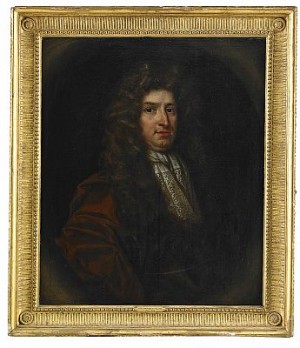