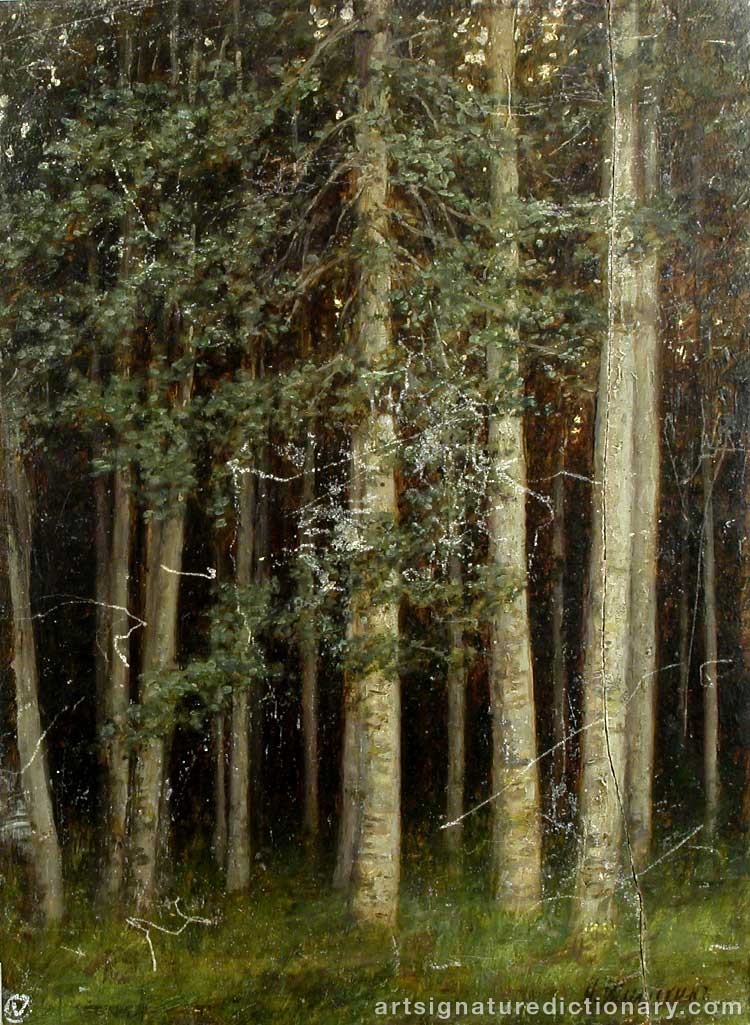 Oil on wood panel, signed in Cyrillic, 36x26 cm. Ostensibly representing a genuine painting by Ivan Ivanovitch Shishkin. The painting has been seized by police and after investigation and expert judgment was explained that this painting was not genuine. It was a forgery. 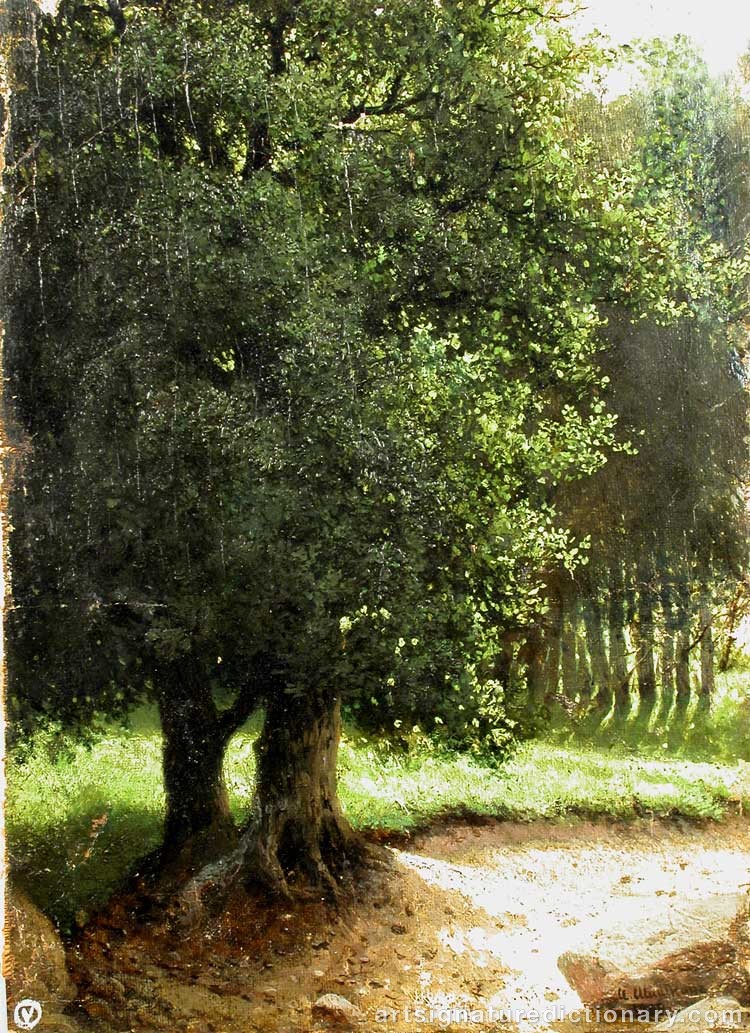 Oil on wood panel, motif with two trees at the forest edge, signed in Cyrillic, 40x29 cm. Ostensibly representing a genuine painting by Ivan Ivanovitch Shishkin. The painting has been seized by police and after investigation and expert judgment was explained that this painting was not genuine. It was a forgery. 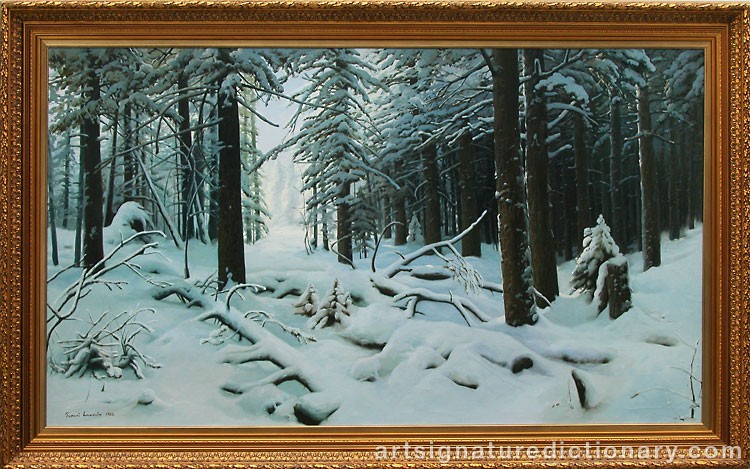 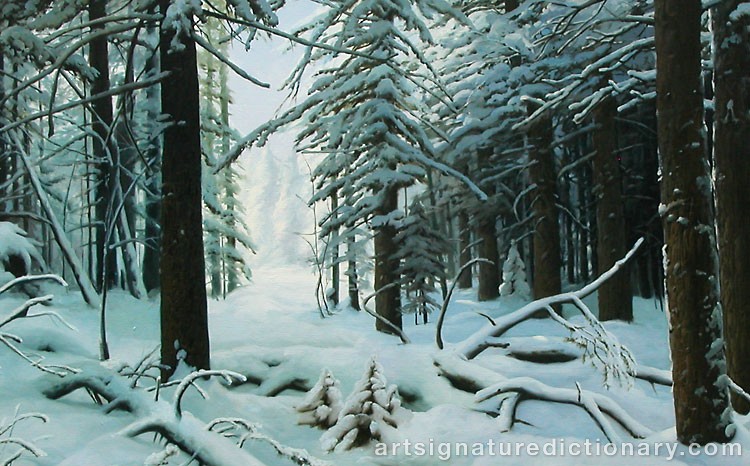 In the 1980's art dealer "Tapani Luovula" organized with his friends an extensive and one of the best-known art forgeries in Finland. He pretended to be a talented, self-educated painter and sold in his own name numerous forgeries of famous artists paintings, which had been made by local artists in Bangkok, Thailand based on the art calendar of the company Nokia and art books sent by Luovula.

Painter, landscape painter. An outstanding engraver, drawer, he also produced etchings and lithographs. Born to a family of merchants. From 1853-1856 he studied at the Moscow School of Painting, Sculpture and Architecture under K.I.Rabus and A.N.Mokritsky, then at the Academy of Arts (1856-1860) under S.M.Vorobyov. In 1857 Shishkin was awarded two small silver medals, and a year later a large silver medal for drawings and eight painted studies produced on the island of Valaam. In 1860 he was awarded the large gold medal for two landscapes under the common title of "Kukko Region". From 1862-1865 he worked in Germany and Switzerland on a pension (scholarship) from the Academy of Arts. In 1865 he was given the title of Academician for his painting entitled "View near Dusseldorf" (1865). From 1873 Shishkin was a professor at the Academy of Arts. In 1894-1895 he was in charge of the landscape studio at the Higher Art School at the Academy of Arts. A founding member of the STAE. Full member of the Academy of Arts from 1893. I.I.Shishkin, an outstanding Russian painter, revealed the characteristic features of the national landscape. His works combined meticulous detail with the large-scale and an epic method in the depiction of nature. In his early work as a student, he had an interest in everyday motives in landscape painting. Later, when he worked in Germany near the Teutoburg forest (Dusseldorf) he won the respect of local artists with quill drawings, which were characterized by their careful performance and meticulous detail. In the 1860s he gradually overcame fragmentation in his painting method, striving for the ultimate honesty in the depiction of nature. The most important feature in Shishkin’s art was the attempt to embody the national uniqueness of Russian nature. "My motto? Be Russian. Long live Russia!", the artist wrote. His best works of this period reveal the beauty, splendour and vastness of the Russian plains. ("Noon. Near Moscow", 1869). The method and features he found during this period were later fully developed in the famous painting entitled Rye (1878), which became a symbol for Russian nature. An analytical approach to the depiction of nature, epic scale in wide sweeping canvases helped the artist to become, as I.N. Kramskoy put it, "a milestone in the development of the Russian landscape painting, a man of his time", (The Pine Tree, 1890). Nevertheless, many experts who have studied Shishkin’s work have noticed in his paintings, a certain absence of emotion or any interest in plein air achievments. The different opinions regarding Shiskin’s creative heritage cannot diminish his service to the cause of Russian art. He was undoubtedly a great master of landscape painting and a "Russian, national artist" (V.V.Stasov).

Ivan Ivanovitch Shishkin was born in Vyatka region 1832. At age 20 he began studying at the Moscow University and four years later, he Vorobev artist as a teacher at the Academy in St. Petersburg, where he later also came to teach. With the help of scholarship, he was able to travel to Germany and Switzerland, studying European art, which inspired him to paint lyrical and romantic landscapes. His technical skill was brilliant and he became a master of painting the details and illuminated landscape. By depicting each tree individually, whether it is narrow or thick, birch or one, he created a photo-realistic paintings that made him one of his most cherished and time-appreciated artists. Source: Bukowskis, Sweden 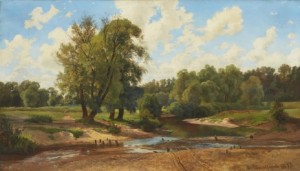 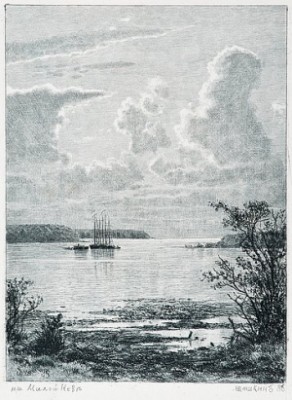 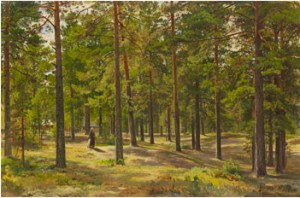 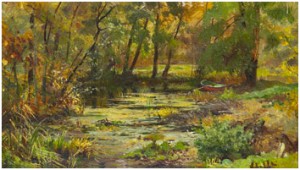 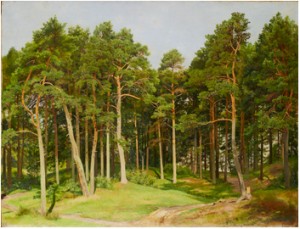 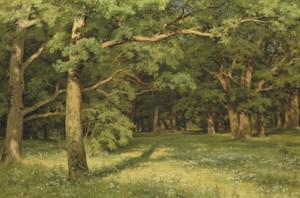 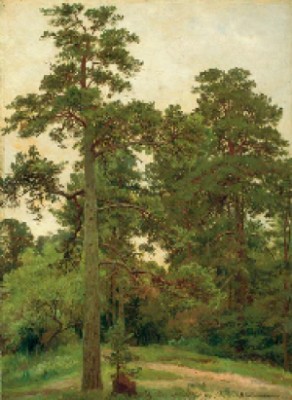