Tintoretto (real name Jacopo Comin; September 29, 1518 – May 31, 1594) was one of the greatest painters of the Venetian school and probably the last great painter of the Italian Renaissance. For his phenomenal energy in painting he was termed Il Furioso, and his dramatic use of perspectival space and special lighting effects make him a precursor of baroque art.
In his youth, Tintoretto was also known as Jacopo Robusti as his father had defended the gates of Padua in a rather robust way against the imperial troops during the War of the League of Cambrai (1509-1516). His real name \"Comin\" has only recently been discovered by Miguel Falomir, the curator of the Museo del Prado, Madrid, and was made public on the occasion of the retrospective of Tintoretto at the Prado in 2007. Comin translates to the spice cumin in the local language.
Tintoretto was born in Venice in 1518, as the eldest of 21 children. His father, Giovanni, was a dyer, or tintore; hence the son got the nickname of Tintoretto, little dyer, or dyer\'s boy, which is anglicized as Tintoret. The family originated from Brescia, in Lombardy, then part of the Republic of Venice. Older studies gave the Tuscan town of Lucca as the origin of the family.
In childhood Jacopo, a born painter, began daubing on the dyer\'s walls; his father, noticing his bent, took him to the studio of Titian to see how far he could be trained as an artist. We may suppose this to have been towards 1533, when Titian was already (according to the ordinary accounts) fifty-six years of age. Tintoretto had only been ten days in the studio when Titian sent him home once and for all, the reason being that the great master observed some very spirited drawings, which he learned to be the production of Tintoretto; and it is inferred that he became at once jealous of so promising a scholar¹. This, however, is mere conjecture; and perhaps it may be fairer to suppose that the drawings exhibited so much independence of manner that Titian judged that young Jacopo, although he might become a painter, would never be properly a pupil.
From this time forward the two always remained upon distant terms, Tintoretto being indeed a professed and ardent admirer of Titian, but never a friend, and Titian and his adherents turning the cold shoulder to him. Active disparagement also was not wanting, but it passed unnoticed by Tintoretto. The latter sought for no further teaching, but studied on his own account with laborious zeal; he lived poorly, collecting casts, bas-reliefs, &c., and practising by their aid. His noble conception of art and his high personal ambition were evidenced in the inscription which he placed over his studio Il disegno di Michelangelo ed il colorito di Tiziano (\"Michelangelo\'s design and Titian\'s color\").
He studied more especially from models of Michelangelo\'s Dawn, Noon, Twilight and Night, and became expert in modelling in wax and clay method (practised likewise by Titian) which afterwards stood him in good stead in working out the arrangement of his pictures. The models were sometimes taken from dead subjects dissected or studied in anatomy schools; some were draped, others nude, and Tintoretto was to suspend them in a wooden or cardboard box, with an aperture for a candle. Now and afterwards he very frequently worked by night as well as by day...... 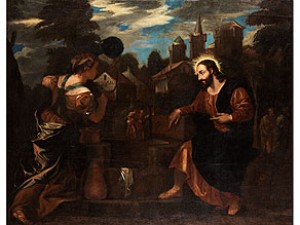 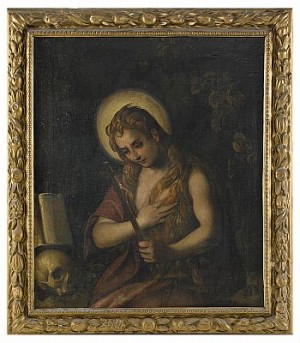