Jakub (Jankiel) Adler was born on July 26, 1895 in Tuszyn (Poland). Jankel, as he was called by his parents and later also by himself, grew up near the textile city of Lodz which had a large number of Polish, German and Jewish inhabitants. His family were Chassidist Jews, the emotional and mystical branch of Judaism that believed in the presence of God in nature rather than in the Decalogue. This image of God seems to have strongly influenced Adler\'s pictorial world with its unworldly, ethereal figures. He began an apprenticeship as an engraver with his uncle in Belgrade in 1912 and then travelled through the Balkan states. During the First World War Adler, the \"suspicious foreigner\", began studying under Prof. Gustav Wiethüchter at the Kunstgewerbeschule in Barmen. This was followed by sojourns in Poland, Berlin and Paris. In 1922 he moved to Düsseldorf where he taught at the Kunstakademie together with Paul Klee. Both artists were a member of the Düsseldorf artist group \"Junges Rheinland\". From 1931 Adler had a studio at the Düsseldorf Academy, which he gave up in 1933 when friends recommended him to leave Germany. His departure from Germany was followed by an active political campaign together with fellow artists and intellectuals during the elections for the Reichstag in 1933, \"urgently propagating\" Communism and against National Socialism. Adler first fled to Paris where he continued fighting the German Fascist regime. At the outbreak of the war in 1939 he volunteered with the Polish army, was released two years later because of bad health and moved first to Scotland and shortly afterwards to London. During the 1940s he was honoured with significant exhibitions in London, Paris and New York. Jankel Adler, whose Oeuvre is mostly figurative - Cubist-organoid, often with harsh contours -, was stylistically strongly influenced by Pablo Picasso and Fernand Léger. He frequently worked in a mixed technique, employing thick layers of paint - unlike Picasso and Léger - so that the surfaces seem sgrafitto-like. Jankel Adler died in 1949 in Albourne near London. 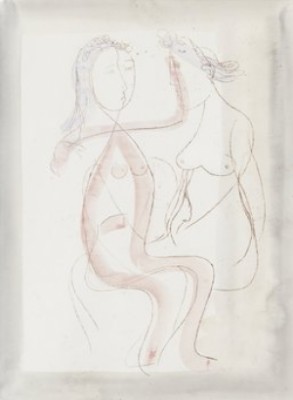