The Spanish painter, graphic artist and sculptor Jorge Castillo was born in Pontevedra in the province of Galicia in 1933. At the age of one his family emigrated for political reasons to Argentina, where Castillo spent his childhood and youth in Buenos Aires. Already in his youth first autodidactic artistic works came into existence. In 1941 he won a competition and got admitted at the École des Beaux Arts in Buenos Aires. Disappointed by the way the school works he left it again after a short period of time. In 1948 he began an apprenticeship as a tracer and further educated himself. An intense co-operation developed from the acquaintance with the Argentinean woman artist Raquel Forner. In 1955 Castillo returned to Spain and lived at first in Madrid creating surrealistic ink paintings and gouaches which he presented at his first exhibition at the Galería Altamira in Madrid in 1959. At the beginning of the 1060s Castillo moved to Barcelona, followed by a two-year stay in Paris. By relocating his life to Geneva in 1966, which was interrupted by long summer stays in Boissano at the Ligurean coast, he got the possibility to work with printed graphics. The following years his most important series of etchings came into existence et al. 'Die Welt des García Lorca' (1972) and 'Grands amants' (1973). When he was prompted by the events in Palomares - American aeroplanes dropped atomic bombs on the village - to execute a monumental triptych composition, he gained international approval and one year later he was invited to the documenta in Kassel with this work. In 1969 Castillo received a scholarship from the DAAD and went to Berlin, where he broadened his painting uvre. He did not return to Barcelona until 1975. Since the beginning of the 1980s Castillo lived in New York and accepted orders for public sculptures in La Coruña, Messina and Barcelona. Jorge Castillo is counted among the most important Spanish artists of Surrealism and Informel and has gained recognition in Europe, South America and the USA. Since 1959 he received several exhibitions and took part in the Biennales in Sao Paulo and Venice. His work was honoured et al. by the 'I. Internationale der Zeichnung' in 1964 and received the Darmstädter Preis für Malerei in 1975. 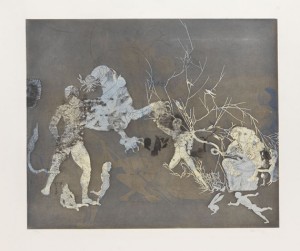 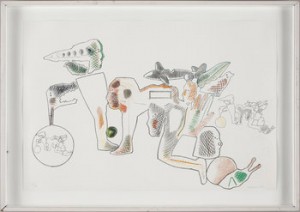