The slogan of Belmonte\'s means \"by the Faith and Virtue\". Besides his Sephardim origins, Leo Belmonte upheld these moral values which guided him throughout his life.
It is with faith indeed that Leo Abraham Abendana Belmonte, born in October 30, 1875 in Stockholm, Sweden, leaps toward his vocation of art weaver. His father, Isaac Julius, a banker of Jewish-Portuguese origin born in Hamburg, Germany and emigrated in Stockholm, wishes that his son pursue in the family business. However young Leo has an artistic temperament and realizes his first paintings at 13 years old. In 1892, at the age of 18, he goes to Paris to study painting at the Julian Academy where he becomes friends with Sándor Nagy, Aladár Körösfői-Kriesch and Percyval Tudor-Hart whom will all play a determining role in his life.
In 1896, Belmonte does his military service in the infantery, in Sweden. Between 1898 and 1899, he stays in Paris, Stockholm, Mainz, Hamburg, Veszprém (Hungary), and sells his first portraits. In 1900, he sets his studio in Mainz, Germany. In spite of his success as portrait painter, he feels dissatisfied and following the advice of Sándor Nagy, he decides to study tapestry. He then returns in Paris and enters the Gobelins Factory. Leo Belmonte finds his true vocation and during this period meets Marguerite Bloch who will become his wife in 1902.
During 1903 and 1904, Belmonte realizes a collection of objects engraved on leather (boxes, frames, wallet, folding screen, etc.) from Nagy\'s drawings. He is rewarded for his works with the Silver medal at the Saint Louis Universal Exposition in the United States in 1904.
In 1905, he leaves for Hungary to join artists\' colony of Gödöllő, founded by his Hungarian friends Körösfői-Kriesch and Nagy. He becomes director of the National Carpet and Weaving Factory. He teaches Gobelin techniques and restores tapestries. At the same time, he realizes tapestries from the models of Körösfői-Kriesch and Nagy. During the Milan International Exhibition in 1906, the works Jesus, the good pilot and The Family (from Körösfői-Kriesch \'s cartoons) are displayed. Belmonte receives the Diploma of honor and the Gold medal in the Decorative arts category.
Perfectionniste and demanding, Leo Belmonte weaves his tapestries alone and signs them with an emblem of two snails, symbols of the slowness and the patience that is required of the weaver. He dyes his wools with pigments derived from minerals and vegetables that he prepares himself, in order to obtain a wide array of colors. Belmonte always remained backstage, working with discretion and modesty. However, his role within the colony is quite significant. Due to the very high level of execution of the tapestries, Gödöllő weaving was considered among the first of Hungary.
Apart from an immovable faith in his vocation, a good dose of courage and virtue were needed by Leo Belmonte when faced with difficult times during two world wars which were two big gashes in his career. In the First World War he flees Hungary where he seemed destined to a promising future. His precipitated return to France in July 1914 end all his artistic projects. For several years, Belmonte loses sight of his friends Nagy and Körösfői-Kriesch, as well as Tudor-Hart. Tapestries are no longer in demand in Paris in this war period and by 1919 Belmonte becomes an accountant to earn a living for his family. For seven years he is \"condemned\" to this labor…
In 1926, he accidentally stumbles upon Tudor-Hart who proposes a tapestry project representing Adam and Eve in Paradise. After a first refusal due to his many years of inactivity, Belmonte eventually accepts the proposition. Thus begin the long and surprising saga of the First Sin tapestry…
From 1926 till the end of their lives, Belmonte and Tudor-Hart remained tightly and painfully bound by their common project and their profound friendship. On one side of the stage, in Canada or England, \"Beans\" , as he is nicknamed in the Belmonte family, an rich and fanciful artist of Canadian origin, man of big culture, struggles with a personal life filled with events and drama which hinder his life as much as his art. On the other side, backstage in France, Leo awaits the cartoons, in the gloomy and sometimes hopeless calm of his studio.
Then, another twist of the fate occurs: the Second World War in 1939 abruptly interrupts the progression of the tapestry during almost four years. Being of Jewish origin, though not practicing, Belmonte and his family have to wear the yellow star. The War years are quite arduous, but Leo remains active: he recreates Körösfői-Kriesch\'s Cassandre for his son Daniel, Dulac\'s Circé for his daughter Yvette, and Körösfői-Kriesch\'s Family, for third time. In 1944 Belmonte resumes contact with Tudor-Hart and work once more begins but as always in a sporadic way, to the great displeasure of Leo.
1954 brings another misfortune: Tudor-Hart\'s death. Then Catherine, his last wife, artist herself, appears on the scene and continues painting the cartoons in a masterly manner. Belmonte resumes hope to end his First Sin, but fate decides otherwise: Leo Belmonte dies on October 9, 1956 at the age of 80 years, as he is on the verge of completing the biggest work of his life. There was only the upper border to be finished. Catherine Tudor-Hart asks René Baudonnet to relieve. In 1961 the tapestry is finally ended 35 years after its birth.
There is likely no tapestry of relatively modest size in the world, such as the First Sin, which has represented so many years of anxiety, displacements and expenses. But this \"Unfinished Paradise\" is a reflection both beautiful and broken with what Leo Belmonte\'s career was. This work remains the ultimate outcome of an art exercised with passion and in which Belmonte remained faithful all his life despite all, fide and virtute… 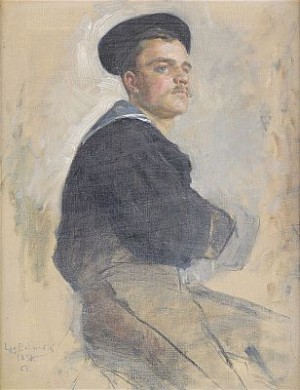