Jian Ling was born in the Shandong Province of China in 1963. He studied at Central Academy of Fine Arts in Beijing and Qinghua University Art College, from where he graduated in 1986. Shortly after graduation he moved to Vienna and Hamburg, and since then the artist has split his time between Europe and China.

Ling’s monumental canvases explore the evolution of Chinese cultural identity by the use of clear and obvious counterparts, which synthesize a wide range of contradictions between the just until recently isolated Communist China and the globalized, capitalist world that it for so long tried to avoid but finally had to take part in. At stake is the contemporary Chinese culture, seen as a symbiosis of traditional Chinese culture, not least in it’s communist guise, and the Western capitalist pop culture, with the superficiality and alienation of ideals driven to a point of mass consumption.

The close-up, neo-realistic, mostly female faces express a combination of vulnerability and a strange aesthetic perfection approaching the super-natural, with their very thin, soft and pale skin, without any actual trace of human imperfection, other than perhaps a fine stream of blood or a flesh-wound. On the other hand, the women – mostly from the elite of Chinese top models – are often provocatively sexualized, with the sensuality of slightly parted lips and sultry eyes, and seemingly unaffected by their wounds, the communist flags nailed in their skin, the blood dripping from their big eyes fixed on the artists “camera lens”. It is a sensualism that is seducing but not satisfying, and the veil of lifelessness through which the seducer is seen leaves the viewer with a slight impression of discomfort.

Like the surgeon uses his scalpel, Ling uses the artist’s brush to render his patients an artificial beauty. Unlike the surgeon, however, Ling leaves the wounds open, like an open door into a world of life beyond the inanimate, perfectly beautiful surface. It is tempting to draw parallels between the red of the blood and the red of revolution and communism. It is only in the red spots of blood, the red books fixed to the models’ bodies or the communist flags nailed in their skin, that we can see the artist’s brushwork and sense the texture of the paint. It is in these mise-en-relief spots that the lifeless perfection cracks and the organic world is present, and it would probably not be too rash to say that this is where the artist’s thought, the “meaning” of the artwork is to be sought 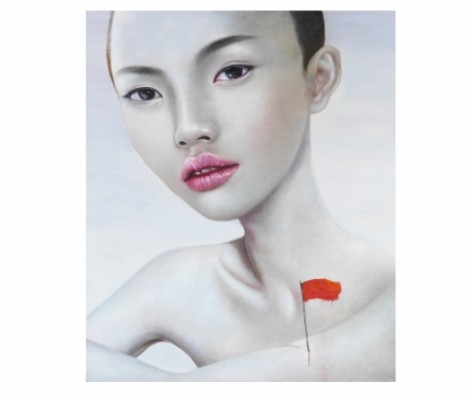