Mary Spain enjoyed huge success and developed a devout following during her protracted career. Her mature style combined whimsey and a magical fantasy in paintings, drawings and found object sculpture. The pieces rarely come up for sale, probably due to the staunch loyalty of her admirers. "Mary Spain was born in Raleigh, North Carolina. She taught art in Chagrin Falls High School during the 1960s. Early in her career, she painted expressionistic landscapes. She moved on to paint humorous take-offs on the genres of Picasso and De Kooning, but really came into her own later when she began to make fantasy paintings such as the one that is seen here: Woman with Mask, Hat, and Moon. Though the painting is not dated, it was probably done in the late 1970s. She was very much influenced by Renaissance portraiture where the figure always has a flattened frontal gaze or total profile. 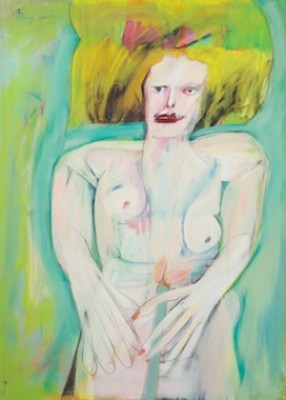 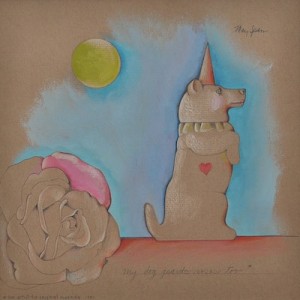