The painter, sculptor and etcher Max Klinger was born in Leipzig on February 18, 1857. He studies under Karl Gussow in Karlsruhe and at the Berlin Academy. He begins working in the Brussels studio of Emile Wauters in 1879. As of 1888 he repeatedly travels to Italy. He is co-founder of the Berlin artist group "XI" in 1892. He lives in Leipzig from 1993 on and joins the Berlin Academy a year later, in 1897 Klinger is appointed professor at the Leipzig Academy of Graphic Arts. He has a second domicile in Großjena as of 1903. Next to Max Liebermann, Fritz von Uhde and Harry Graf Kessler, Klinger is vice president of the newly-founded "Deutscher Künstlerbund" (German Artists Union). He is appointed chairman of the Villa-Romana-Association for the studio house in Florence as of 1906.
Symbolism with ancient-mythological and Christian references and contents are Max Klinger's characteristic features. Among his main works are "Kreuzigung" (Crucifixion) from 1890, "Christus im Olymp" (Christ on Mount Olympus) from 1897, "Die griechische Geisteswelt" (The Greek Spiritual World) made in 1909 for the auditorium of the Leipzig University which was destroyed later.
His sculptures are geared at the newly-discovered Greekp polychromy and he uses color stones, for instance in "Die neue Salome" (The New Salome) from 1893 and "Kassandra" (1886-1895). The monumental statue of a seated "Beethoven" (1886-1902, Leipzig, Neues Gewandhaus) is regarded as his main sculpture.
The most important part of Klinger's oeuvre, however, is occupied by graphic works. It counts among the greatest achievements in graphic art in modern times, regarding its narrative and artistic qualities as well as its technique. Max Klinger masterly executes etchings and aquatints and manages to develop them further. An extensive number of series of etchings originates in this period.
Max Klinger dies in Großjena near Naumburg on July 4, 1920 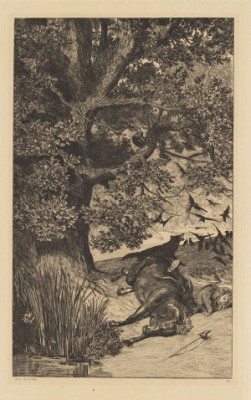 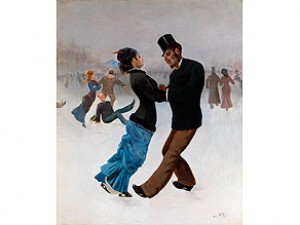