The "Painter of Trees", Olive Holbert Chaffee, was born on January 9, 1886 in Woodville, Kentucky. She began her formal training in art with private lessons while still in high school. Later she studied with Chauncey Ryder and George Conroy in New York. Chaffee attended the Corcoran Art Gallery School and was later influenced by W. Humphrey Woolrych in St. Louis and W.A. Pratt in Denver. Chaffee's first marriage was to William Gibson in Cairo, Illinois. In the 1920's she moved to St. Louis and in 1926 she married artist and architect, Roy O. Chaffee. It was at about this time that her career took off. Her landscape paintings were mostly of Missouri though many reflect her trips about the country. She did landscapes of the Green Mountains of Vermont; western Kentucky; St. Petersburg, Florida; Colorado, Wyoming and California. One painting, titled Missouri Vetch Field, hung in the Oval Office during the presidency of Harry S. Truman. The artist's exhibitions include the Women's National Exposition in St. Louis (1926) -first landscape prize; National Arts Club; the Southern States Art League; Wacha Galleries, St. Louis; Gramercy Park Art Club Galleries, New York; Noonan-Kocian Galleries; St. Louis and Barn Gallery, St. Louis. 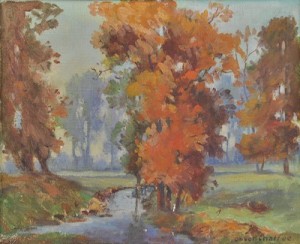