1931 - Suffering from an illness that makes a complete immobilization necessary, he spends his time drawning and his parents, who are teachers, teach him how to read and write.

1944 - He takes the A level in philosophy. As soon in october, at 18 years old, he goes to Paris by the \"first train of the Liberation\". He has known for a long time that he wants to become a painter. Of these teenage years in Limousin, he will retain the passion for nature, for the countryside and the violent feeling that conquering freedom constitues an absolute necessity.

1945-1946 - Living in Paris, Paul Rebeyrolle eagerly dedicates himself to the discovery of painting through every exhibition : Soutine in the \"galerie de France\", Picasso in the \"autumn exhibition\" etc...

1947 - Important event : the Louvre reopens its doors. Still now the shock is immeasurable. As the entrance is free on sundays, as soon as the rooms open, he discovers the Venitians, Rubens, Rembrandt...

1950 Trips to Spain and Italy so as to visit the museums. Taking part in group exhibitions and shows. He will confirm his eagerness for freedom in the atmosphere that follows the Liberation and the end of the war. Because his taste for independence, he refuses the teaching of Art Schools, whatever they may be, and confines himself to working in the studio in Paris and in Eymoutiers where he still often stays.

1953 - Probably motivated by the unbearable awareness of the intensification of the \"Cold War\" and the way the propaganda uses it, he joins the communist party. He will leave it in 1956 because of the events in Hungary and the ambiguous position the party adopts concerning the war in Algeria. This breaking off is symbolized by a large painting which he entitles \" A bientôt J\'espère\". Moreover, these years are marked by the double opposition he shows towards abstract painting and socialist realism.

1956 - The next ten years will be devoted to research on various subjects, and according to its results, punctuated with numerous and various exhibitions.

1959 - At the age of 33, in Eymoutiers, he paints \"Planchemouton\", a large painting commissioned by Paris First Biennial Event Committee in order to decorate the stairs in the Fine Art Palace. This Painting was named after the barn where Rebeyrolle painted it, and after the brook which runs next to the espace Paul Rebeyrolle.

1963 - He leaves Paris and moves to the countryside in order to live and work, first in the departement of Aube, then in Côte d\'Or.

1968 - - From this years, still engaged on behalf of freedom, Rebeyrolle starts a cycle of series readily defined as being \"political\" :

…series that go on, recuring, interrupted with breaths :

2005 - Paul Rebeyrolle died on the 7th of february in his studio of Boudreville. 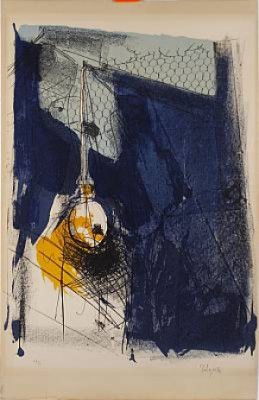