Born in Brooklyn, New York, Paul Strisik became a resident of Rockport, Massachusetts, where he did landscape painting that brought him national recognition. After serving in the Navy during World War II, he studied at the Art Students League in New York City and with Frank Vincent DuMond. In 1953, he moved to Rockport, where he was active in the Art Association and other local civic organizations. He was a member of the National Academy of Western Art, the American Watercolor Society, and the Oil Painters of America. During his long career, he won 185 awards including 16 gold medals. He and his wife, Nancy, also maintained a home in Santa Fe for 12 years, and in 1996, he was honored as Artist of the Year by the Santa Fe Rotary Club. He was widely respected for his willingness to share his talents with young artists, and taught numerous workshops including at the Scottsdale Artists' School. He wrote several books, his last one being "Capturing the Light in Oils." A reviewer in "Art Talk" quoted him: "God's light on a blade of grass is such a miracle, and so difficult to capture in paint; it is worth a lifetime of trying" (10/98). He died July 22, 1998 at his home in Rockport. 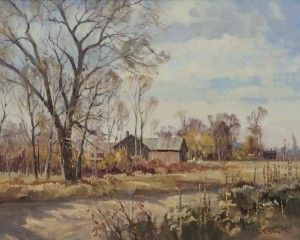 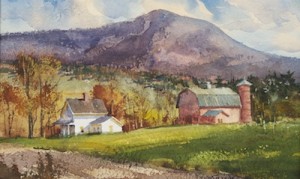