Per-Inge Isheden, Swedish artist born in Avesta 1937, started painting while still a child, inspired by his mother who was an amateur artist. Living in a small town far away from big cities, he had few opportunities of seeing art. Pictures in books and magazines were his main inspiration sources. A visit in his early teens to the Anders Zorn museum many miles away made a deep impact on him. Zorn’s illusionistic aquarelles were for some years his ideal. Then a teacher told him briefly about the composition technique of Paul Cézanne. He was fascinated and studied every book illustration he could find.

At the age of twenty Isheden went to Stockholm for art teacher studies. To suddenly be living in a metropol with a million people, lots of museums, cafés and restaurants was a somewhat chaotic experience to him. But he finished his studies, got a job in Stockholm, married and settled down there.

On trips to different cities in western Europe he continued studying the art of Cézanne and also of the impressionists. He got more and more fascinated by the art of Claude Monet, especially works like the cathedral paintings shown at Jeu de Paume in Paris.

After working 13 years as a school teacher he started his career as a professional artist by creating a science fiction cartoon for adults. During that work he learnt the composition technique he now uses in his paintings.

He says he chooses a few fundamental elements, from which he forms a new reality. This along with his use of quadratic canvases is a result of Isheden’s studies of cartoons such as Dick Tracy by Chester Gould. His illusionistic techniques, particulary his handling of the light, are intended to make the painting look \\\\\\\"as real as life itself\\\\\\\", quite contrary to the modernists, who want to make their tricks obvious.

While still living in Avesta, Isheden participated in group exhibitions. As a professional artist he has regularly showed his works at galleries and art fairs in Stockholm and other places in Sweden, during the nineties also in Berlin, Germany.

In recent years he has become increasingly well-known, especially in Stockholm where he finds so many of his motives. Critics write of \\\\\\\"his mixture of refinement and vulgarity\\\\\\\" and his use of elements other artists usually avoid - like cars, buses, traffic signs and blinding light effects. They also mention his use of unorthodox techniques, like dripping or splashing paint or letting it flow freely over the canvas, his unusual \\\\\\\"bleeding\\\\\\\" red and his use of gold paint.

He has been described as a \\\\\\\"romantic with his feet firmly on the pavement\\\\\\\". His preference of bad weather motives is striking. Dusk moods with a mixture of disappearing daylight and neon light effects are frequent. He also finds motives in rather chaotic places, such as the Central Station or a traffic roundabout.

Critics in Stockholm have difficulties trying to describe his art. He is not a modernist but, on the other hand, he is not a traditionalist either . So, what is he? Gallery visitors have no such problem. They come in increasing numbers to look at his paintings, and to buy them, no matter how they are described. 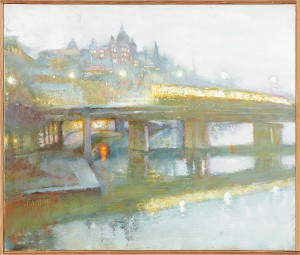 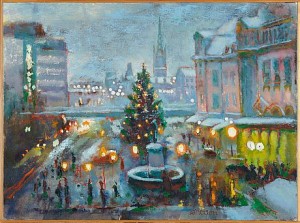 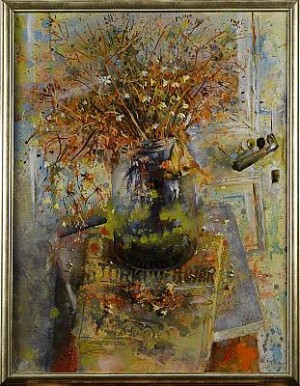