\"Started drawing before I could walk or talk, at the age of 14 I knew I was going to be an artist. So, in 1982 I moved to Stockholm and studied the Fine Arts. Then I went to Andalucia in Spain and saw the light. It inspired me alot and Spain will always be my second home. I went back to Stockholm in 1986, exhibited in restaurants and worked as a cook on the side. After a trip to Asia in 1992 I opened up a sushibar called Sushi Akuten, Hard work, big success and so on, I sold my part 6 years later. Went back to Thailand (see familypage) , later Mexico, Spain, South Africa and now back home, busy painting, being a father and working with Asian food and catering. Life is great!\" 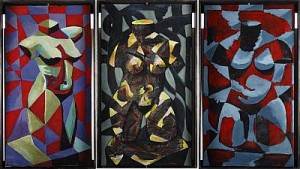