Waller was well known for his 18-19th century subject pictures, usually romantic in nature, most usually with animals. The scenes based on the landscape and architecture around his home in Gloucester. He worked in oils and watercolors and did illustrations for at "The Graphic". Waller was originally intended for the Army, and with that career in view was educated at Cheltenham College; but he displayed so strong an inclination for drawing that he joined the Gloucester School of Art, and at the age of eighteen entered the Academy Schools. His father was an architect, and young Waller went through a course of instruction in the parental office, as well as studying animals on the farm which his father kept. All these early influences had their effect upon his work throughout his life. He was devoted to horses especially, and would recount many experiences of his encounters with jockeys, or of his tramps for miles in search of equine models. Horses figure in nearly all his paintings, and they are drawn with loving care and unerring skill. Mr. Waller's method was first to draw the animal at a distance so that he could visualise it in its entirety, and then paint it at close quarters in order to copy faithfully such details as the veins and muscles, or the texture of the animal's coat. 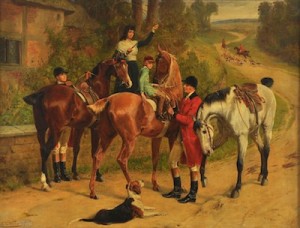