Stuart Park was born at Kidderminster, Worcestershire, but his parents were from Ayrshire and he was brought up there. Although he studied at Glasgow School of Art and in Paris, under Lefebvre, Boulanger and Cormon, he began by painting in his spare time, taking up art professionally in Glasgow in 1888.

He specialised in painting carefully arranged bouquets of roses, lilies, orchids and azaleas and developed a highly individual technique, using thick and rapid strokes against a dark background, suggesting, rather than defining, the texture and colour of flowers. Park worked only in Scotland, exhibiting regularly at the RSA and Glasgow Institute and exhibited rarely in England. His work became fashionable, particularly in the West of Scotland, and he was soon able to charge fairly high prices for his rapidly executed paintings. He was associated with the Glasgow Boys and exhibited with them but was never a central member of the group. He died at Kilmarnock, aged 71. 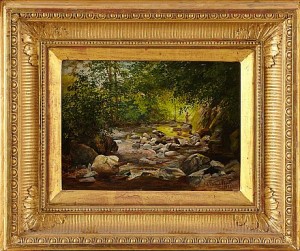