Sven Lindqvist is one of Sweden\'s greatest contemporary writers, with more than thirty books written over the last forty years, yet only recently has his fame begun to spread beyond the shores of Scandinavia. His books are mostly non-fiction, and they are so original and provocative that his talents are finally being recognised by an international readership, from France and Germany to Britain and the United States.

In spite of globalisation and the speed at which people now fly around the world, it still can take a long time for the work of a writer in one language to make that quantum leap into the language of another. Writers often have a specific audience in mind, but readers in one country do not necessarily have the same needs and desires as those in the country next door. Yet to judge by airport bookshops, a handful of common denominators clearly exist. Almost everyone seems to want to read about sex and crime, and the language of origin matters not a hoot. Increasingly, it seems, we also like to read about travel, and about faraway countries. The more we move about the globe, the more we want to know about it, and we want to know what other people make of it too. Which is probably why an interesting writer in Sweden, beavering away over the years and providing Scandinavian readers with his thoughts about the outside world, has finally come to the attention of a non-Swedish audience.

This year, Lindqvist\'s book \"The Desert Divers\" appears in English from Granta, a British publisher famous for providing good writing for the intelligent reader, and its publication follows on last year\'s huge critical success for the translation of \"Exterminate All The Brutes\", an ingeniously researched exploration of the roots of European racism and genocide, skilfully presented as a travel book though time and space.

While the earlier book picked up a line from Joseph Conrad\'s \"Heart of Darkness\", which described a journey into the backwoods of the Belgian Congo, \"The Desert Divers\" is a re-examination of the writing of three other European writers who were fascinated not just by Africa but by the experience of \"diving\" into the Sahara: André Gide, Antoine de St Exupéry, and Isabelle Eberhardt.

Lindqvist\'s account of their obsession with the desert is mingled with his own encounter with this heart of a rather different kind of darkness.

I have been a good friend of Lindqvist\'s for more than thirty years, and we meet most years, sometimes in Stockholm but chiefly in the reading rooms of the British Library, where he does much of his research. He is unfailingly cheerful, with the mien of a scholar but the infinite zest of an inveterate traveller. We first bumped into each other in Bolivia during Che Guevara\'s guerrilla campaign in 1967, when many footlose Europeans were trying to discover what was going on. He was travelling through Latin America in an old car with Cecilia, his first wife, and their small son Aron. He was preparing a book on peasants and the land question, and writing articles for the Dagens Nyheter, the Swedish liberal daily.

We travelled together for a few days, visiting the infamous tin mines of the high Andean plateau, and I have never forgotten his immense energy and the intellectual rigour with which he would address the people we met and interviewed. He is not really a \"travel writer\" in the usual sense, but he uses the experience gained in unfamiliar locations to entice the reader into consideration of problems that are often a good deal nearer home. His books are always lean and spare, and almost didactic, achieving their aim through dry wit and sparkling intelligence rather than with purple passages of description. His lapidary style of writing, expressing thoughts and discoveries in short bouts of concentration, comes closer to the European tradition of writers like Nietzsche and Gide than to the discursive narration of most Anglo-Saxon writers Lindqvist has travelled over much of the globe, and his interest in faraway places started when he was quite young. \"The world outside Sweden in my childhood,\" he recalls, \"was the missionary who came to Sunday School and told us about his experiences in Africa or China, or wherever. Often he would have some fascinating objects to show us, of native artistry. There were also books in which you could find woodcuts or other black-and-white pictures that seemed quite out of this world. Very simple by today\'s standards, they gave you an enormous lust to go there.\"

He fears that such experiences may no longer be open to people in quite the same way. \"Today, with so many pictures and so much printed material, and of course the television, I don\'t know whether they give you the same longing to go there and to see it for yourself. The media images are so perfect that they can almost be a substitute for the actual travelling.\"

Lindqvist\'s first enthusiasm was for China, sparked off by reading \"The Glass Bead Game\", that infinitely intricate novel by the Nobel prizewinner, Herman Hesse. He was immensely affected by the book, he says, \"and it struck me that in order to really understand the game of glass beads you would have to learn some Chinese.\" He stayed in Stockholm to study with the great Swedish sinologist, Bernard Karlgren, and then went off to China to live there for two years in the early 1960s, just after Mao Tse-tung\'s \"Great Leap Forward\". First he produced a book of reportage, published in English as \"China in Crisis\", and then he wrote a more philosophical work, \"The Myth of Wu Tao-tzu\", that many people consider to be his finest work, though only parts of it have been published in English. He continued to travel, through Latin America and parts of Africa, and with return visits to China and side expeditions to Russia and Afghanistan.

Lindqvist has been a writer with many interests, some of them changing gradually over time. Although a frequent traveller, he remains deeply rooted in Swedish society and has produced several books that reflect his liberal and reformist interests. One of them, called \"Dig Where You Stand\", was designed to explain to workers how they could set about researching the history of the firms they worked for. By exploring the archaeology of the workplace, he hoped that workers would be better able to confront the difficulties of the present day. Another was concerned with the need to shake up the government bureaucracy, and to introduce the idea of \"work exchange\", encouraging civil servants to take a sabbatical doing a menial job.

Yet another of his projects, which grew out of \"Exterminate All The Brutes\", was to revive the memory of anti-racists. \"It surprised me to find, when I was researching this part of our history, that all the time there had been people who had been opposing racism, even at a time when racism was very

predominant, in the second part of the 19th century. There were always people who

resisted and criticised the thoughts of the racists, in a way that today we would

find very modern and right. Yet little was written about them. All the

histories of racism were about the great racists, nothing was written about the heroic

peoples who resisted it.\" So Lindqvist decided to fill the gap, producing an

account of the lives of some twenty uncelebrated anti-racists. The book is now

published in English under the title of \"The Skull Measurer\'s Mistake\".

Once when we met in Stockholm, Lindqvist took me to his Friday encounters

in the public sauna. He would gather together, on the wooden benches in the

steam, a cross-section of the Stockholm population who had become his friends,

and they would talk the afternoon away. On other rewarding occasion, he lent me

his Chinese masseuse. Long before it became fashionable, he had an enthusiasm

for going regularly to the gym, an interest that eventually led by a devious

route to the writing of \"The Desert Divers\", the second of three books that all

relate to a series of journeys through Africa.

the body-building world.\" While doing his physical exercises, \"the main

character in the book suddenly gets in touch with his childhood, and remembers

for him as a child, and how he had once sought to build it up.\" Other memories

are resurrected, and \"the dreams that he used to have about the Sahara, and

the longings he had had to go to that vast and empty space, full of sand and

book, so he finished the body-building book, called \"Bänkpress\" (Benchpress - the

Body-Builders), and started on \"The Desert Divers\", with its evocation of the

\"I had read about these divers as a child, in a book published in the 1920s

by a Swedish officer, Thorsten Orre. He was the first Swede to really work in

the Sahara, and he wrote about his adventures with the French military. He

the desert. They are tremendously deep, for it is very far down to the ground

water in the Sahara.\" In Lindqvist\'s book, the image of the divers was to

environment of the desert, excited both by its strangeness and and by the sense of

Lindqvist himself has made several expeditions across North Africa,

reportage. \"During one of these journeys,\" he recalls, \"I went with a Swedish

diplomat to the Polisario camp on the Algerian side of the border, and I interviewed

a lot of Polisario people. Because of an accident, I lost all my notes, and I

was never able to make anything out of this experience. But the memory of it

remains with me very vividly.\"

Lindqvist is no longer such a lustful traveller as he once was, and he

lives quietly today in an apartment in a leafy square of central Stockholm, with

his second wife, Agneta Stark, a distinguished economist. He is the fortunate

beneficiary of a rather wonderful, typically Swedish, form of state bursary,

whereby 150 of the country\'s greatest artists and musicians, writers and poets,

that of a metal worker, it will be topped up by the state. \"If it\'s Ingmar

it rather useful; for many poets, it\'s their main source of income.\"

Now in his 68th year, Lindqvist can look back on an agreable life of

considerable fulfilment. \"I really had two great childhood ambitions,\" he says, \"to

write and to travel. To see the world was extremely important, that was the

sublime thing, to go there and to have been there.

\"But I also wanted to write, though not necessarily about travelling,

because I got such an immense pleasure out of reading; it occurred to me that the

pleasure of creating such text would be even more satisfying.

\"I have been able to fulfil both these ambitions,\" he concludes with a

twinkle, \"and in this way my life has been immensely successful, because I\'ve

hardly done anything else, other than the two things that I really really wanted 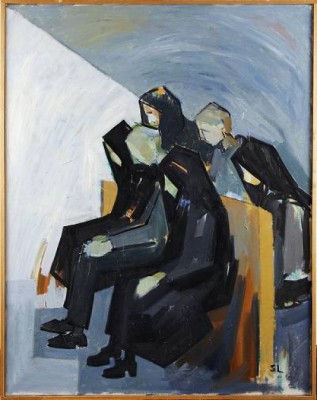