Thomas Willeboirts Bosschaert (1613, Bergen op Zoom - 23 January 1654, Antwerp) was a Dutch-born Flemish Baroque painter.
Willeboirts Bosschaert\'s Catholic family had moved to Bergen op Zoom in the late sixteenth-century. He moved to Antwerp in 1628, and entered the studio of Gerard Seghers for eight years. In 1636 or 1637 he became an Antwerp citizen and joined the Guild of St. Luke.
His style is heavily influenced by Anthony van Dyck, both in history and portrait, leading some scholars to suggest that Willeboirts might have studied in that studio. The artist ran his own studio with at least nine known pupils, and collaborated with other artists of the time such as Daniel Seghers, Paul de Vos, Jan Fyt, Jan van den Hoecke, Frans Snyders and Adriaen van Utrecht, as well as with Peter Paul Rubens on the Torre de la Parada series (1636 – 1638). Between 1641 and 1647 he also worked for the Dutch stadtholder Frederik Hendrik of Orange. Hendrik\'s widow, Amalia von Solms also commissioned a work from Willeboirts for the decorations of the Oranjezaal (Orange Room) in the Huis ten Bosch, a decorative program that included both Dutch and Flemish masters. In 1653, a competition was held in Antwerp between him and Cornelis Schut to create an altarpiece with money that had been allocated for Van Dyck before his death. Schut\'s painting, The Martyrdom of St. George (Royal Museum of Fine Arts, Antwerp), won.
Willeboirts made the grisaille centerpieces for two of Daniel Seghers garland paintings. For one of these Seghers was awarded with a solid gold maulstick, and Willeboirts was given a hundred guilders. 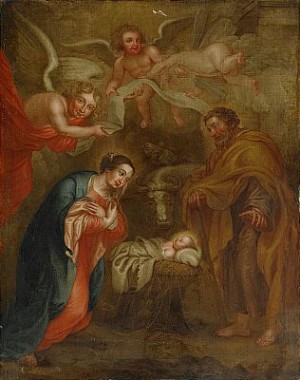