Tony Cragg was born in 1949 in Liverpool. His work is notable for its exploration of different materials, including found objects and raw matter of various kinds. Cragg's method of dispassionate ordering and composing seeks to make evident the vast array of objects and images that surround us, but with which he feels modern man has only a superficial relationship, based on function alone. In order to enhance our imaginative and emotional relationship with the world at large, Cragg proposed beginning with physical matter as the fundamental basis of experience. To this end, in the early 1980s, he began to work with objects arranged on the floor or wall in simple configurations, such as Postcard Union Jack (1981; Leeds, C.A.G.), made from sherds of plastic, or an axehead composed of various real and fake wooden elements. By 1985 he had extended his range to include carved and machine-cut stone and cast bronze and iron to make sculpture of simple, generic images or standardized prototypes, such as a house or a test-tube.

Tony Cragg studied at Gloucestershire College of Art, Cheltenham from 1969 to 1970. He went on to study at Wimbledon School of Art, London from 1970 to 1973 and subsequently at the Royal College of Art, London from 1973 to 1977. In 1977 he moved to Wuppertal in Germany, and has taught at the Kunstakademie, Düsseldorf since 1978.
Tony Cragg RA in his studio, Cragg’s first solo exhibitions were held in 1979 at the Lisson Gallery, London, at the Lützowstr Situation, Berlin and at the Künstlerhaus Weidenallee, Hamburg. The following year he had several solo shows in countries throughout Europe including the UK, France, Germany and Italy. His international reputation quickly spread, and many solo exhibitions of his work have been held annually in key venues throughout the world. Retrospective exhibitions have been held at the Tramway, Glasgow (1992) and at the Whitechapel Art Gallery, London (1996).
Cragg was the British Representative at the 43rd Venice Biennale in 1988, the year that he won the Turner Prize. More recently, he was awarded the Shakespeare Prize in 2001.
He received his Professorship at the Kunstakademie, Düsseldorf in 1988 and was elected Royal Academician in 1994. In 1996 he received an Honorary Professorship in Budapest and in 2001 received a Professorship at the Hochschule der Künste (HdK), Berlin, an Honorary Degree Award of Doctor of the University of Surrey and an Honorary Fellowship from the John Moores University, Liverpool. Cragg lives and works in Wuppertal, Germany. 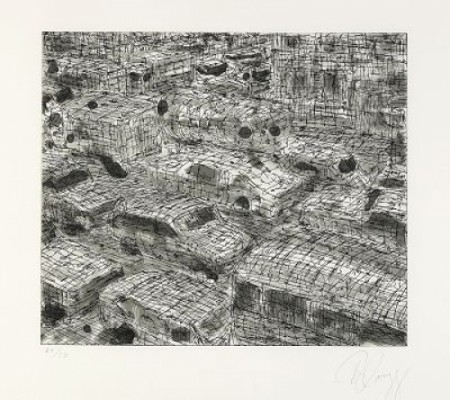