Roelofs was the most important painter of The Hague School and thus one of the founding fathers of Dutch Impressionism. In 1847, the same year in which he founded the Hague artists association «Pulchri Studio», he moved to Brussels. Having begun under the influence of the Romantic tradition in which nature was represented in detail, he radically changed his artistic vision when he encountered the painters of the Barbizon school in France, who often painted in the open air and left out a great many details, which – according to a theory that was ultra-modern at the time – represented the total appearance of landscape, sky and clouds in a way which was more faithful to nature.
He was continually travelling between his then home in Brussels and The Hague, which made the ideal person to bring early Impressionism to the Netherlands. In Belgium he was one of the co-founders of the «Société Belge des Aquarellistes» and was held in high esteem by the Belgian royal family. While living in Belgium he would usually spend the summers in Holland, until he was to settle permanently in The Netherlands again in 1887 so that his sons Willem Elisa and Otto Willem Albert, who were also to become painters, could further their education. 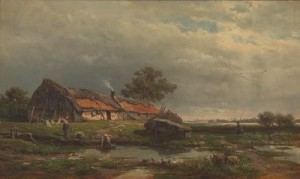