Gevorg Yeghiazarian was born in Gyumri, Armenia in 1963. He studied at the Panos Terlemezian Art School and Fine Arts Institute in Yerevan, and the St.Petersburg Repin Academy of Art. In 1994 he became a member of "Union of Artists" of Armenia. In 1998 he also became a member of the International Association of Arts (UNESCO). In 2006 Gevorg won Tekeyan prize for his "Split Life" painting. Presently he lives and works in Yerevan. The shadow of the ever-watchful wild soul transforms permanently looking at the fading messages of life in eternal silence. I cherish the dream of creating as a prayer state and the mystery of cognition as freedom of wisdom. Under the reign of subjectivism a new boundary of one's freedom is born and laid on the pure and mute surface of the canvas. Animating it with splashes of colors is the only way of molding my individuality. Ambiguity is a necessary quality of an artist's inner self. The ghost of the woman brings the ambiguity of a man's feelings down to earth later to kindle his dream of the unreal and the intangible. May this very minute be blessed with the touch of beauty and greet the solemnity of instants to come. Gevorg This artist's works combine his sensitive inner world with the surrounding reality; hence moody and melancholic paintings which reveal the artist's meditations. His paintings are marked with poetic lyricism, and the uncertain boundary between the real and the imaginary. His work is unique, characterized by self-isolation and a concentration of thoughts and emotions. There is an independence of light and color which is dominated by contrasts of space and substance, rest and strain and transparency and opaqueness of colors. The result is an expression of enchantment, mystery and the eternal.

If you are interested to know more about my ceramics works, just visit my web-site www.hayceramicart.com. 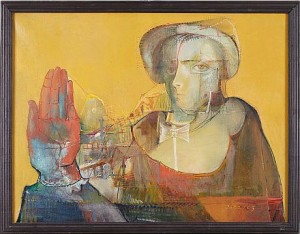