Marcel Janco was a Romanian and Israeli visual artist, architect and art theorist. He was the co-inventor of Dadaism and a leading exponent of Constructivism in Eastern Europe. In the 1910s, he co-edited, with Ion Vinea and Tristan Tzara, the Romanian art magazine Simbolul. Janco was a practitioner of Art Nouveau, Futurism and Expressionism before contributing his painting and stage design to Tzara's literary Dadaism. He parted with Dada in 1919, when he and painter Hans Arp founded a Constructivist circle, Das Neue Leben. Reunited with Vinea, he founded Contimporanul, the influential tribune of the Romanian avant-garde, advocating a mix of Constructivism, Futurism and Cubism. At Contimporanul, Janco expounded a "revolutionary" vision of urban planning. He designed some of the most innovative landmarks of downtown Bucharest. He worked in many art forms, including illustration, sculpture and oil painting. Janco was one of the leading Romanian Jewish intellectuals of his generation. Targeted by antisemitic persecution before and during World War II, he emigrated to British Palestine in 1941. He won the Dizengoff Prize and Israel Prize, and was a founder of Ein Hod, a utopian art colony, controversially built over a deserted Palestinian Arab settlement. Marcel Janco was the brother Georges and Jules Janco, who were his artistic partners during and after the Dada episode. His brother-in-law and fellow Constructivist promoter was the writer Jacques G. Costin, known as a survivor of 1940s antisemitism. 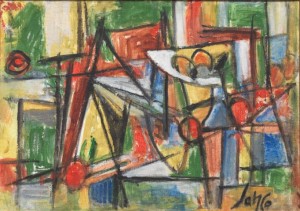