Patricia Douthwaite began to study mime and modern dance with Margaret Morris, whose husband, J. D. Fergusson, encouraged her to paint. This important influence apart, she was self-taught. In 1958 Pat lived in Suffolk with a group of painters, including the Scots Colquhoun and MacBryde, and William Crozier. From 1959-1988 she travelled widely, to N. Africa, India, Peru, Venezuela, Europe, U.S.A., Kashmir, Nepal, Pakistan, Ecuador and from 1969 lived part of the time in Majorca, more recently in various properties across the Scottish Borders. She died in July 2002 at Broughty Ferry.
She her first solo at The Scottish Gallery was in 1977 and despite the lack of a permanent base and studio she exhibited regularly from 1991 through The Scottish Gallery. This culminated with a retrospective in June 2000. As the art market expanded many more people discovered Douthwaite; her life force, technical accomplishment and uncompromising subject matter. Sometimes life enhancing and often dark: a visceral, tortured release of her id. All her work however was made with a stylishness and passion that marks her out as one of the great individual voices in post-War British art.The illustrated catalogue of our 2005 Memorial Exhibition examines the work and life of this remarkable artist. 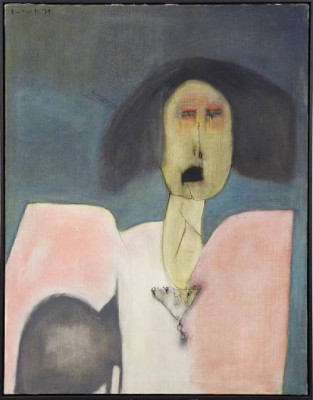