The son of a merchant, Maliutin lived his entire life in Moscow. He studied under Priannishnikov and Vladimir Makovsky at the Moscow School of Painting, Sculpture and Architecture from 1883 to 1886.
With skills in areas such as portraiture, genre painting and theatre design, Maliutin is perhaps most famous for designing the matrioshka doll - an image now universally associated with Russia. In the 1890s while working under Savva Mamontov, Maliutin saw a group of Japanese wooden dolls of the Seven Gods of Fortune, the largest of which contained the other six nesting inside. Nesting eggs and apples had already existed in Russia, and now Maliutin designed a Russian model of the Japanese dolls. Vasili Zvezdochkin carved the eight-doll toy, and Maliutin painted it at the Children\'s Education Workshop-Salon at Abramtsevo. In 1900, Mamontov\'s wife showed the dolls in Paris at the World\'s Fair, earning it a bronze medal.
Maliutin earned the title of Academician in 1914 and was a member of the World of Art movement and worked in Talashkino under Tenisheva.
The offered lot can be compared to another self-portrait of the artist in the Tretyakov Gallery from 1901. After twenty years, the stylish middle-aged man becomes an older gentleman with a grey beard and cane. 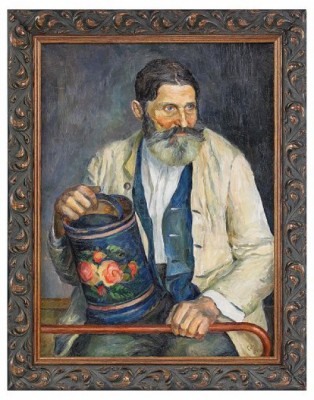