William C. Grauer was a painter, muralist, and art teacher active in Cleveland for nearly 60 years. Born in Philadelphia, he graduated from the Pennsylvania Museum School of Industrial Art in 1914 and saw service in France during WW I. Coming to Cleveland as a free-lance artist in 1927, he married Natalie Eynon (1888-1955), a fellow native Philadelphian and artist. Invited to contribute murals to the President's Cottage at White Sulphur Springs, W. Va., in 1932, the Grauers returned to found and co-direct the Old White Art Colony, School and Gallery there during the summers from 1934-40. During the same period they also started the art department at Cleveland College of Western Reserve University. Grauer painted murals for the West Virginia exhibitions in both the Chicago Century of Progress (1933) and the New York World's Fair (1939). Following the death of his wife, Grauer married another Cleveland College art instructor, Dorothy Turobinski, in 1964. He retired from WRU as associate professor of art in 1966 but continued to paint and to teach privately. Increasingly abstract in style in his later years, his work had been exhibited in 55 Cleveland Museum of Art May Shows. 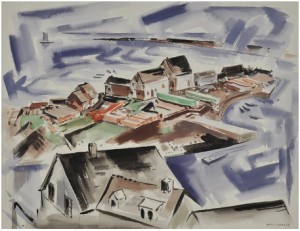 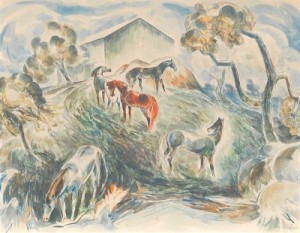 ...horses In A Field Near A Barn On A Hill 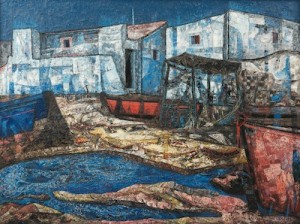