William Samuel Schwartz studied at the Vilna Art School in Russia from 1908 to 1912. At the age or sixteen he immigrated to America and three years later entered the Art Institute of Chicago where he was awarded a scholarship. To help support himself, he worked 16 hours a day waiting on tables, ushering in theatres, singing in concerts and operas. In 1912, the year after graduation from the School at the Chicago Art Institute (with honors in life study, portraiture and general excellence in painting), he made his American debut at the annual show of Artists of Chicago and Vicinity. Since that time his work has been seen in national and international exhibitions held in this country and abroad. Schwartz worked in oils, watercolor, lithography, and as a sculptor. Schwartz’s work has been exhibited in the Metropolitan Museum of Art; Museum of Modern Art; Whitney Museum; Pennsylvania Academy; Art Institute of Chicago; Joslyn Museum; Oklahoma Museum; Dallas Public Museum and State Museum of Illinois; Associated Artists Gallery and numerous other museums. 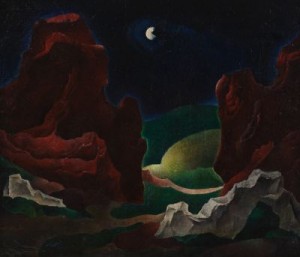