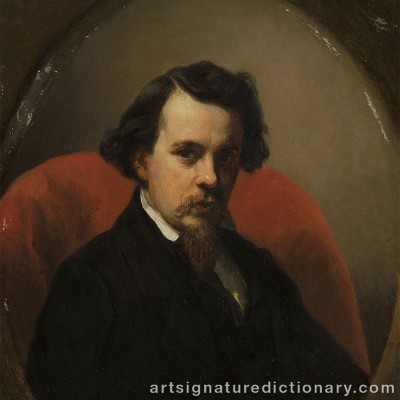 With the current re-assessment of the Dutch Romantic Landscape School, Charles Leickert is emerging as a much more important figure than he was rated by Marius at the turn of the century. The fact that he lived to almost ninety explains his prolific oeuvre and the variations in style and quality among his pictures. He can be a traditional landscapist in the manner of his master Shelfhout … or he can paint sparkling effects of light with quick impressionistic brush strokes-an altogether more modern manner. At his best he is something of a Dutch version of Constable, a high point in a century exceptionally well supplied with landscape artists.

Landscapes and cityscapes were a very popular art form in the Netherlands during the nineteenth century. After the end of the French occupation in 1815, a new sense of pride emerged in all things Dutch. In the fine arts, many artists rejected the more classical French landscape, aiming instead for Dutch landscape with rivers and windmills and looked back to the ‘Golden Age’ of the seventeenth century for inspiration. Charles Leickert worked during this period and became known for his landscape and cityscape paintings. “He painted the cluttered banks of the Amstel River, a picturesque embankment near a ferry to the city of Dordrecht, and ice scenes with Dutch windmills and skaters. He nevertheless succeeded in evoking a highly Romantic mood by drenching some of his paintings in an almost supernatural light and, by his sublime rendering of the evening sun.” (Harry J. Kraaij, Charles Leickert 1816-1907: Painter of the Dutch Landscape, Schiedam, The Netherlands: Scriptum Signature, c. 1996, pg. 10)

Charles Henri Joseph Leickert was born on 22 September 1816 in Brussels, Kingdom of the Netherlands (became Kingdom of Belgium in 1830). His parents were born in Germany where they lived during the first years of their marriage, then relocated to Brussels in 1815. After the French occupation of the Netherlands ended, Leickert’s father took the position of “Chamberlain” in the court of King Willem I. Several years later, the family settled in The Hague, after it was designated the official capital of the Netherlands. However, the years that followed were not that happy for Charles, as he lost four of his siblings to sickness, and was orphaned when he was only fourteen years old.

Leickert began his artistic training at the age of eleven. In 1827, his father enrolled him in The Hague Drawing Academy where he studied under Bartholomeus (Bart) van Hove (1790- 1880), the well known artist of landscapes and cityscapes. However, two years later, his studies were interrupted for a year when his mother became very ill. After her death, he was placed in an orphanage in 1830, which paid the expenses for his lessons at the Academy, and where Leickert made considerable progress. In 1834, he won first prize in the third class of the academy for a drawing he submitted, which would be the only award that Leickert will ever receive during his lifetime. (Kraaij, pg. 22)

Around the mid 1830s, Leickert joined the studio of Wijnand Nuyen (1813-1839), the painter who specialized in landscape, townscape, and marine paintings. As one of the few Dutch painters of the nineteenth century to have been influenced by the French Romantic Movement, Nuyen became influential even though he died at the young age of twenty-seven. While Leickert studied with him for a short period, Nuyen’s tutelage is evident in his choice of picturesque townscapes with lively details such as laundry and pigeons (Villagers And Horse at a Tollgate, c. 1840). In 1839, the same year that Nuyen died, Leickert made his debut at the General Exhibition of Dutch Living Masters in The Hague with a painting entitled The Crossing of a Ferry, which was purchased by the Society for the Promotion of Visual Art. During this period, Leickert’s subjects consisted mostly of simple combinations of architecture, some figures, and nature, and “his washed out colors and lighting recall Bart van Hove.” (Kraaij, pg. 26) However, one of his early works depicting a beach scene with “the tranquility of late moment and of the figures who look out on the sea beneath the pink and yellow sky,” reflected the Romantic style of the first half of the nineteenth century. (Kraaij, pg. 28)

Leickert’s next and most influential teacher was Andreas Schelfhout (1787-1870), the renowned landscape artist best known for his winter scenes. Shelfhout was considered “the Dutch Claude Lorain (French, 1602-1682),” and was a popular teacher who attracted an impressive list of students. Beside Leickert, Johannes Hoppenbrouwers (1819-1866), Nicolaas Roosenboom (1805-1880) and Johan Barthold Jongkind (1819-1891) attended Shelfhout’s studio. It was under Shelfhout that Leickert diligently learned to paint winter scenes, and rapidly absorbed his master’s working methods. However, as noted by Kraaij, he may have “looked too much to Schelfhout to broaden his own horizons.” (pg. 31) The fact that his works followed closely those of Shelfhout was also noticed by art critics at the time, as one observed “A River view by Mr. Leickert, in The Hague, is well drawn and painted, soft and charming in tone, in the manner of Shelfhout, whom he fortunately seems to be emulating.” (Kraaij, pg. 31)

After leaving the orphanage in 1840, Leickert continued to reside in The Hague and began to establish his artistic career. By 1841, he had produced and exhibited his first winter scene, which received a positive review from an anonymous art critic who said: “Mr. C. Leyckert, of The Hague, demonstrates with a winter scene with some buildings that he has turned the lessons of his master to good use.” (Kraaij, pg. 31) He also began painting summer landscape, a genre, which he loved, as well as more water views, which later became a permanent element in his compositions.

By that time, Leickert was fully involved in the artistic scene of The Hague, and enjoyed many friendships with a number of painters that he met during his years at the Academy and the studios of his teachers. Among them were Salomon (“Sam”) Verveer (1813-1876), Antonie Waldrop (1803-1866), and Charles Rochussen (1814-1894). His friendship with the latter led to a collaboration in a painting entitled Dutch Winter Scene (1845), which proved beneficial to Leickert in more ways than one. Rochussen was a more established artist therefore the value of this work was greatly enhanced. The painting was sold for eleven hundred guilders, a very large sum of money for Leickert in 1845, as his paintings usually were sold for five hundred guilders. Leickert also gained artistically as his “figures and animals at the time were relatively stiff and often unfinished.” (Kraaij, pg. 39)

In 1848 Leickert moved to Amsterdam where he resided until 1887. He wanted to establish himself as an independent painter and knew that Amsterdam offered more opportunities for artists to exhibit and sell their work. He became a member of the artist’s society Arti et Amicitiae, and soon got involved in the artistic life there, after reuniting with a number of his artist friends. One of them was Rochussen, who lived in the same house as Leickert for some time. Once more, they collaborated on a number of works, such as Beach near Scheviningen (1848) and Cityscape in Winter (1849), the first of this genre that Leickert exhibited. In 1856, Leickert joined the Board of Governors of the Royal Academy of Fine Art in Amsterdam.

The years following his arrival to Amsterdam until the 1870s were Leickert’s most successful. During that period, he produced a wider variety of themes that included more beach and dune scenes. In addition, as Kraaij observed “his paintings are carefully finished; elements such as vegetation and background are executed in particular detail. The color contrasts are often surprising and the rendering of chiaroscuro is magnificent.” (pg. 54) Among the works he produced during that period were View or Het IJ with Amsterdam in the Background (1849) and View of Amsterdam in the Winter with Setting Sun, which was well received in the press. An art critic observed:

Leickert has long managed to situate himself outside the school of Shelfhout-that is, to learn, to observe with his own eyes. His View of Amsterdam in the Winter with Setting Sun is one of those paintings at which one might gaze for a long time to recover, as it were, all that is surprising and alluring about a sunset in December. The sky has a particular divine effect, being harmoniously rendered and incontrovertibly one of the most handsome of the Exhibition. (Kraaij, p. 56)

In the 1860s Leickert was asked to participate in the project for the Arti Society’s Historical Gallery. In order to enhance the status of history paintings in Holland, young artists were asked to portray the nation’s past “envisioning of Holland’s renown in the fields of history, science, art trade and craft.” (Kraaij, p. 53) In 1862, Leickert’s painting was among the first group of the fifty-two works to be completed and inaugurated by the King on 29 March 1862. This painting entitled Amsterdam, the Greatest Trading Centre of Holland portrayed a view of the medieval town with several figures dressed in the costume of the period (title was initially given by an exhibition reviewer; in 1895 this same painting was exhibited under the title The Town Hall of Amsterdam in the Mid-Fifteenth Century).

During the Amsterdam years, Leickert continued to produce conventional compositions that usually followed a set procedure. His winter scenes were mostly done on the diagonal, with one or more windmills, to either the left or right. In addition, Leickert made several versions of a painting, in which he changed minor details in the composition or in the figures. He “usually made sketches after nature and drew on his personal “archive” of drawings. He then dressed up his landscapes with figures repeatedly in his winter and summer scenes, without any changes. We encounter various figures again and again in his winter scenes, without any changes, as if he applied his staffage with a template. Examples of this are a man with an ice-sledge and, in his cityscapes and summer scenes, a woman carrying a basket on her head.” (Kraaij, pg. 63) Unlike other contemporary artists, Leickert did not introduce new elements in his work that proclaimed the Industrial Revolution, but preferred to paint “picturesque cities and timeless, unspoilt landscapes,” which evoked “a mood of nostalgic Romanticism. “ (Kraaij, pg. 75)

It was that attraction to pure landscape that prompted Leickert to travel to Germany in 1859 and visit the Rhine Valley, Rudesheim, and Mainz where he met Apollonia Schneider and married her that same year. Leickert was forty-three years old and she was seven years younger. They spent about eight months in Germany before returning to the Netherlands. After residing for a year in The Hague, the couple moved to Amsterdam, where Leickert continued to enjoy success. However, with the establishment of The Hague School, Leickert’s work became less popular and the demand for it decreased substantially. At that time, his work was considered old fashioned and critics pointed out to the “lack of passion and the refined technique of painters like Shlefhout and Leickert, which stood in sharp contrast to the rough and often deliberately unfinished work by The Hague School and the Amsterdam painters.” (Kraaij, pg. 80)

In 1887, Leickert decided to end his artistic career, and moved to Mainz in Germany with his wife. While he remained a member of the Arti society, he submitted only one painting entitled Landscape in Taunus in the exhibition of 1893. Among the few works that he produced during the last twenty years of his life were Winter Landscape with Frozen Canal and Skaters (1891) and Summer Scene in a Dutch City (1892). Leickert died on December 5, 1907.

Leickert was a prolific artist producing approximately seven hundred paintings, of which he exhibited about eight-five. 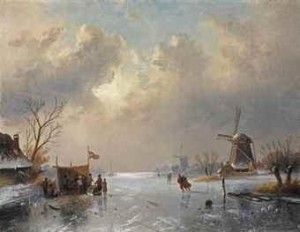 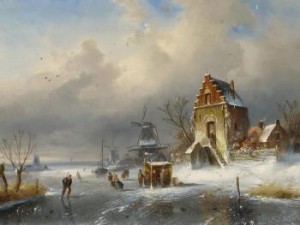 Winter Day On The Ice 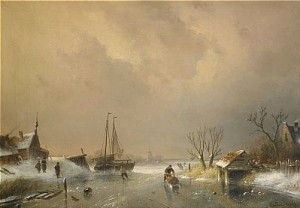 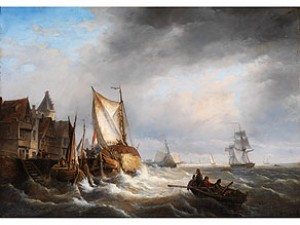 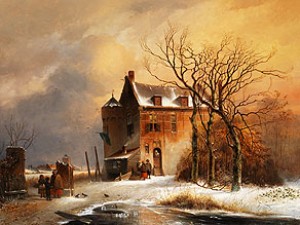