Guy Pène du Bois was born in Brooklyn, New York into a well-to-do, intellectual family. His father, Henri Pène du Bois, was a writer and bibliophile with a passion for French literature; the renowned French short-story writer Guy de Maupassant was a family friend and the younger Pène du Bois’ namesake.
Pène du Bois first began studying painting at the age of fifteen, after having dropped out of high school, when he enrolled at the New York School of Art and started classes under the school’s founder, William Merritt Chase. Here he learned the fundamentals of technique, but it was in the classes taught by Robert Henri that he began to develop his artistic identity. Henri urged his students to use elements from everyday life as subjects and to eschew technical virtuosity in favor of conveying their subject’s essence through the lens of individual perspective.
Invigorated by his studies with Henri in New York, Pene du Bois traveled to Paris in 1905. He wrote of his time there in his book Artists Say the Silliest Things:
Back in Paris, I began life as a painter in the little studio of the Rue de la Grande Chaumiere. Directly across the street, corner of Notre Dame des Champs, was the American Art Association, a club sponsored by Rodman Wanamaker. Here I ate a part of the time among American painters and students – students of painting, architecture, two or three of music, two or three of writing, attending lectures at the Sorbonne. They came from all over the United States, and as a valiant declaration of their patriotism, the greater
number of them chewed tobacco. …The few abstainers usually congregated in the
billiards room, where distances were shortened by the obstructing table. Here the walls were inlaid with paintings by members, and the conversation, being less frequently interrupted, was liveliest.
This formative period would have a lasting impact on the young artist, as discussed by scholar Betsy Fahlman:
Guy’s strengths as an artist are first revealed in his paintings from this period. … In Paris he executed his first independent paintings, some of which … document his exploration of the city. …As he had learned from Henri, Guy’s execution is rapid in recording the general details of pose and lighting. These early oils and drawings reveal an artist of considerable talent, clearly influenced by his teachers but moving in an independent direction. They also chart out themes he continued to explore in his mature work.
Among the themes that would endure throughout his career is an interest in scenes of high society engaged in leisurely activities, shown from the perspective of an outside observer. In the present work, Billiard in Paris, a game played by well-dressed men takes place as the artist/observer watches from a distance. Only the waiter on the right stands directly facing, and thus engaging, the viewer. Pène du Bois’ choice to separate the viewer from those involved in the scene is a stylistic and conceptual motif that appears in his works for the rest of his career. From this dispassionate vantage point, Pène du Bois manages to simultaneously capture the emotional atmosphere of the scene and provide a witty, tongue-in-cheek commentary on the human spectacle.
Guy would have likely stayed in Paris much longer, but his father fell ill in May of 1906, so he decided to return home in July. Unfortunately, Guy’s father passed away before his arrival and although his death was not unexpected, the young artist was disheartened for some time. Fulfilling his father’s request, around this time he began to use his full name professionally; the signature “Guy du Bois” was replaced with “Guy Pène du Bois” from the end of 1906 onward. 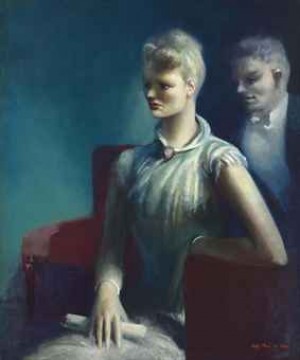 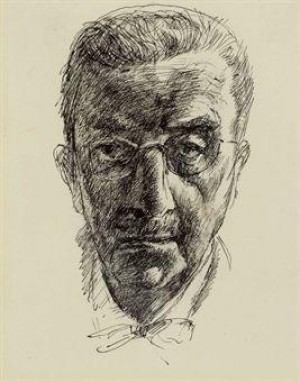 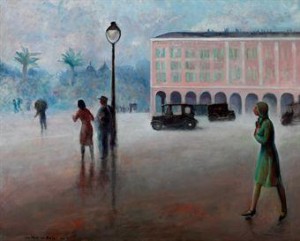